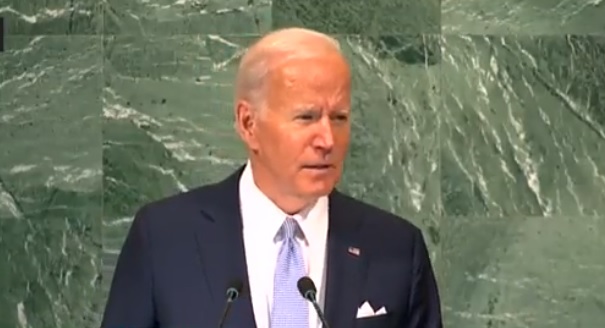 Russia Shamelessly Violated UN Charter Principles In Its Invasion Of Ukraine: US Prez Biden At UNGA

“This war is about extinguishing Ukraine’s right to exist as a State. Whoever you are, wherever you live, whatever you believe – that should make your blood run cold. That’s why 141 nations in General Assembly came together and condemned Russia’s war against Ukraine,” said Biden.

Condemning Russia’s invasion of Ukraine, Biden said Russian President Vladimir Putin’s recent nuclear threats against Europe shows his “reckless disregard for responsibilities of a non-proliferation regime” and that the country is calling up more soldiers to join the fight. “Kremlin is organising a sham referendum to try to annex parts of Ukraine,” he said.

“US doesn’t seek ‘Cold War’ or ‘conflict’ with China,” the US President said, adding, “Like you, the United States wants this war to end on just terms – on terms we all signed up for, that you cannot seize a nation’s territory by force. The only country standing in the way of that is Russia.”

Calling upon all the nations – democracies or autocracies – to speak out against Russia’s invasion and help Ukraine in its effort to defend itself, President Biden reiterated that the nations stand in solidarity against the Russian aggression.

Biden’s speech comes close on the heels of reports that Russian President Vladimir Putin announced partial mobilisation in Russia as Moscow loses ground on the ongoing conflict with Ukraine.

As per a report by news agency AP, Putin also warned the West that “it is not a bluff” and that Russia would use all means available to protect its territory. He also accused the West in engaging in a “nuclear blackmail” and alleged that there have been “statements of some high-ranking representatives of the leading Nato states about the possibility of using nuclear weapons of mass destruction against Russia.”

Putin’s statement comes a day after Russian-controlled regions in eastern and southern Ukraine announced their plans to hold votes on becoming integral parts of Russia.