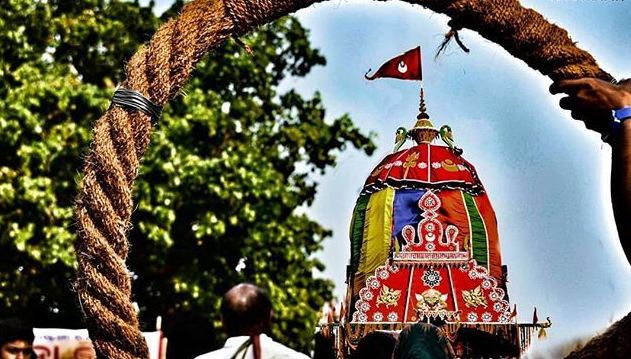 Bhubaneswar: Ashok Ashtami, or Ashokastami, is associated with Goddess Shakti and Lord Shiva. The festival is mainly celebrated in Odisha and is a significant festivity at the famous Lingaraj Temple in Bhubaneswar.

Lingaraja Mahaprabhu is also described as “Swamyambhu Linga” (i.e. self-originated). This temple is dedicated to HariHara a form of Bhagwan Vishnu and Bhagwan Shiva

Like Shivaratri, Rukuna Ratha Yatra is considered to be an important festival in the Lingaraja temple. It is celebrated in the month of Chaitra on Shukla Ashtami (eighth day of the bright fortnight). During Tretya Yuga, Bhagwan Rama also visited Ekamra Ksetra during the Vanavasa time (14 years exile). Lingaraja Mahaprabhu also received him as a guest and requested him to spend some time here. The place where Bhagwan Rama stayed is known as Rameswara. Bhagwan Rama’s birthday fell during the period of stay in Ekamra Ksetra. Lingaraja Mahaprabhu went along with Devi Parvati, Ganesha and Kartikeya on his Ratha (Chariot) to Rameswara Temple to wish Bhagwan Rama and this festival is celebrated till day in the name of Ratha Yatra of Lingaraja Mahaprabhu. This Ratha festival lasts for five-seven days

Ratha Yatra is also famous as Rukuna Ratha Yatra or Ashokastami Yatra. This festival is believed to be “Papa Binashakari Yatra” i.e. “Festival which destroys/eradicates all evil and sins”

The Ekamra Purana describes this festival in two chapters. The same is also repeated in later texts such as Svarnadri Mahodaya and Ekamra Chandrika. The Kapila Samitha also includes Ratha Yatra as one of the seven yatras. The festival was so popular that it finds mention in the Tirthacintamani of Vacaspati Misra, Kalasara of Gadadhara, Kalanirnaya of Raghunatha, etc.

On this day, the Utsava Vigraha (Chalanti Pratima) of Lingaraja, the Shivalinga, which is believed to have been consecrated by Ramachandra,along with Gopalini (Parvati), Kumara and Nandikesvara including the image of Govinda aretaken out in a Ratha from the Lingaraja temple to Rameswara temple

The Rathafestivallasts for five-seven days. The Ratha is drawn by the devotees from the Lingaraja to Rameswara and starts its return journey on 5th day

Odisha: More stress to be given on door-to-door survey in rural areas

CBSE Extends Deadline For Schools To Tabulate Marks For…