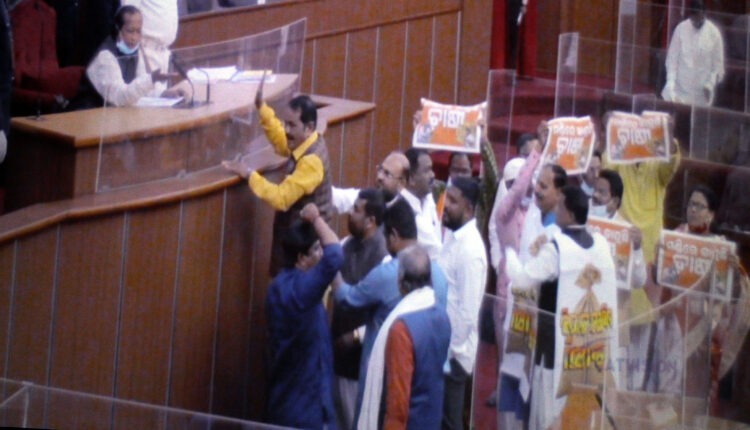 Bhubaneswar: Unruly scenes were witnessed in Odisha Assembly with the Opposition members stalling the proceedings over the mandi issue.

While the BJP members showed placards on the farmers’ issue and distress sale of paddy, the Congress indulged in sloganeering over the issue.

Speaker Surjya Narayan Patro had to adjourn the proceedings of the House a number of times as the pandemonium continued. Patro was forced to call an all party meet for the smooth management of the House proceedings.

The Question Hour could not be held due to ruckus in the House. Congress member Taraprasad Bahinipati stood up on a chair started giving slogans on farmers issue. As the Opposition members did not discontinue their protest in the House, the Speaker announced that the proceedings of the House will continue till 7 pm amid the protest.

Despite Speaker’s appeal to the Opposition members to maintain calm, there was no response from the Opposition. The second half of the session also witnessed uproarious scenes and business in the House could not be carried out.

Andhra Pradesh alluring bordering villagers to come to its fold!