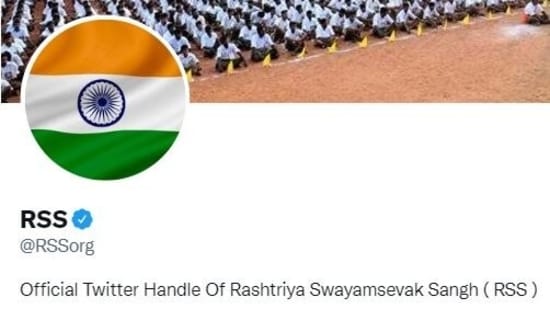 New Delhi: Ahead of Independence Day, the Rashtriya Swayamsevak Sangh (RSS) on Friday changed profile pictures of its social media accounts to the national flag from its traditional saffron flag.

As the country is celebrating the ‘Azadi Ka Amrit Mahotsav’ to mark 75 years of India’s independence, Prime Minister Narendra Modi had urged people to put the ‘Tiranga’ as the profile picture of their social media accounts between August 2 and 15.

The RSS, the political fountainhead of the ruling BJP, has been criticised by the Congress and other Opposition over its stand on the national flag.

Congress leader Rahul Gandhi took a dig at RSS and said those who are raising slogans of ‘Har Ghar Tiranga’ today are from the ‘anti-national’ organisation which refused to hoist the tricolour for 52 years.

Following the attack from the Congress, the RSS earlier said they already extended support to Har Ghar Tiranga and Azadi Ka Amrit Mahotsav programmes and were in the process of deliberation regarding social media photos.

After the change in social media photos of the RSS accounts, Congress leader Pawan Khera said the ‘sheepish’ RSS finally changed the photos after tremendous pressure for a week.