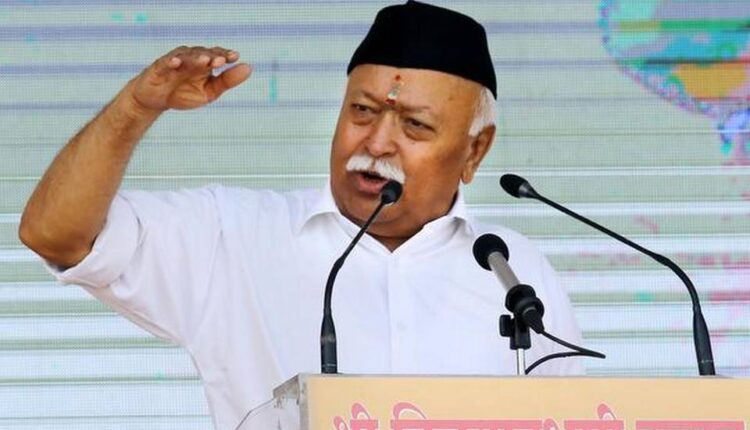 New Delhi: RSS chief Mohan Bhagwat called for a “path through mutual agreement” on the controversy over the filming of Gyanvapi mosque in Uttar Pradesh’s Varanasi.

Hindu and Muslim petitioners are fighting a legal battle over a court-ordered filming of the mosque complex to check whether there are idols of Hindu Gods and Goddesses, and whether a “Shivling” has been found, as claimed by the Hindu petitioners.

“We had special devotion towards some places and we spoke about them but we shouldn’t bring out a new matter daily. Why should we escalate the dispute? We have devotion towards Gyanvapi and doing something as per that, it’s alright. But why look for a Shivling in every masjid?” said the chief of the RSS, short for Rashtriya Swayamsevak Sangh, the BJP’s ideological mentor.

The RSS chief’s statement defuses weeks of comments by rightwing groups and leaders that indicated the matter could turn into street mobilisation, making some to draw parallels with the demolition of the Babri Masjid in UP’s Ayodhya in 1992.

“Gyanvapi matter is ongoing. We can’t change history. Neither today’s Hindus nor today’s Muslims created it. It happened at that time. Islam came from outside via attackers. In the attacks, Devsthans were demolished to exhaust the morale of those who wanted India’s independence,” Mr Bhagwat said at an event in Nagpur.

“Issues were raised over places in which Hindus have a special devotion. Hindus don’t think against Muslims. The ancestors of today’s Muslims were Hindus too. It was done to keep them forever devoid of independence and suppress morale. So Hindus feel they (religious places) should be restored,” he said.

“If there are issues in mind, it will rise. It is not against anyone…Find out a path through mutual agreement…If a path does not always come out, people approach court, and if it is done then whatever the court decides should be accepted. We should abide by the decisions, considering our judicial system pious and supreme. We should not question its decisions,” the RSS chief said.

The Varanasi district court on Monday deferred till July 4 a hearing on the Gyanvapi masjid committee’s petition challenging the maintainability of a suit filed by Hindu women.

The Gyanvapi mosque stands next to the iconic Kashi Vishwanath temple. Five women petitioners have asked the court to allow daily prayers before idols on its outer walls as well as other “visible and invisible deities within the old temple complex”. The site is currently open for prayers once a year.