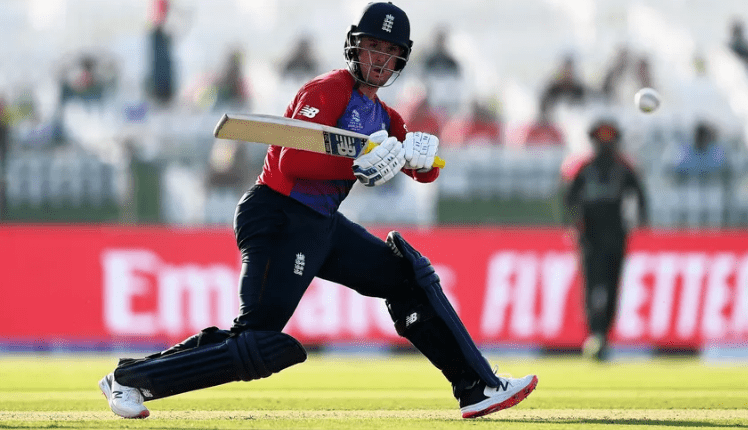 Roy fittingly marked the occasion of his 50th T20 international by blitzing five fours and three sixes in an entertaining half-century that helped his side easily chase down Bangladesh’s 124 for nine, having beaten the West Indies by six wickets in their opening fixture.

Moeen Ali and Tymal Mills took two wickets in two balls at either end of a Bangladesh innings that never really got going as Liam Livingstone picked up the crucial wickets of Mushfiqur Rahim and captain Mahmudullah in the first ever T20 meeting between the two sides.

Defeat at Sheikh Zayed Cricket Stadium in Abu Dhabi leaves Bangladesh on the verge of being knocked out at the Super 12 stage, with the Tigers needing wins against West Indies, South Africa and Australia to stand a chance of progressing.

Bangladesh chose to bat and Liton Das showed his intent early, twice advancing down the pitch to hit Ali for four as 10 came from the first over.

England captain Eoin Morgan persisted with Ali in the attack and the off-spinner soon had his revenge, taking two wickets in two balls in the third over.

Das’ aggressive approach proved his undoing as he top-edged a catch to Livingstone to depart for nine before Mohammad Naim, five off seven, tamely chipped one to Chris Woakes at mid-on to leave Bangladesh 14 for two.

Things got even better for England in the final over of the powerplay when a sensational grab from Adil Rashid saw the back of experienced No.3 Shakib Al Hasan for just four, as Woakes got one to rise on him.

Rashid came onto bowl after helping to restrict Bangladesh to 27 for three in the powerplay and almost had Rahim spectacularly caught by Mills.

The former Bangladesh captain combined with current skipper Mahmadullah to get their side up to 60 for three at the halfway stage.

But Rahim was trapped lbw on review by Livingstone for 29 off 30 balls which ended a promising stand of 37.

His replacement at the crease, Afif Hossain, did not last long as a comical mix-up with Mahmadullah after Mills’ mis-field allowed the Englishman to recover and combine with Jos Buttler to have him run out for five, with Bangladesh really struggling at 73 for five in the 13th over.

Golden arm Livingstone, bowling a mixture of off-spin and leg-spin, struck again as Mahmadullah’s attempt to up the run rate saw him miscue one to Woakes for 19 with Bangladesh’s hopes of an imposing total departing with him at 83 for six.

Bangladesh fans had to wait until the penultimate over to see a maximum, but Nasum Ahmed slapped two sixes and a four off Rashid on his way to an unbeaten 19 off only nine balls to add some much-needed late impetus.

On his 50th international T20 appearance, Jason Roy smoked Shakib, the tournament’s leading wicket-taker, for four off the very first ball of the chase to set the tone for England.

Roy and Buttler put on 39 in 29 balls until the England wicket-keeper holed out for a run-a-ball 18 off Ahmed to bring Dawid Malan to the middle.

England brought up their 50 with the last ball of the powerplay and, after Roy scored quickly off Mahedi Hasan, were already halfway to victory before the conclusion of the seventh over.

Roy’s assault did not relent and he and Malan brought up their 50 partnership before the Surrey man slogged Ahmed for a straight six to bring up his own half century from just 33 balls, on the day he was presented a cap for reaching the same milestone of appearances.

Having ramped Shoriful Islam for an audcious six, Bangladesh finally saw the back of Roy for 61 off 38 balls when he was caught off the same bowler, but the job was virtually done with England needing just 13 more.

Jonny Bairstow joined Malan, who had put on 73 with Roy, and hit the winning runs with 35 balls to spare.