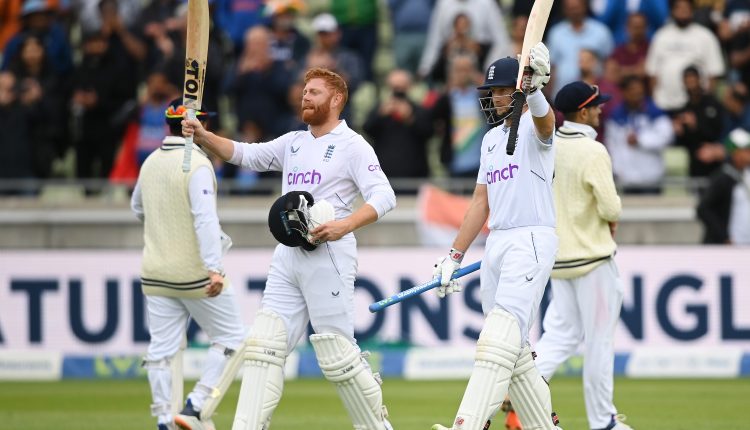 Birmingham: An unbeaten stand of 269 runs between Joe Root and Jonny Bairstow for the fourth wicket helped England to defeat India by seven wickets in the rescheduled 5th Test match at Edgbaston in Birmingham on Tuesday and level the series 2-2.

Root (142*) and Bairstow (114*) were the architects of a historic victory for England, who bounced back from a disappointing first innings performance with the bat, which helped the hosts chase down a 378-run target in the fourth innings.

This is their highest successful chase in the final innings of a Test. The hosts resumed their innings at the score of 259 for 3 on Tuesday and got home quite comfortably as Root and Bairstow tore apart the Indian bowlers.

India had set a target of 378 for England in the final game of the 5-match Test series.

India finished their second innings with 245 runs on board and with a first-innings lead of 132 runs, they put a challenging 378-run target for England in the fourth innings.

For India Rishabh Pant and Cheteswar Pujara were the top scorers. Cheteshwar made 66 while Pant scored a fluent 57 runs in the second innings.

Without Rohit Sharma and KL Rahul, India opened with Shubman Gill and Cheteshwar Pujara, who could add only 27 for the first wicket in the first innings. Hanuma Vihari, Virat Kohli and Shreyas Iyer failed to make contributions of any significance as India reeled at 98 for five before a sensational rescue job by Rishabh Pant and Ravindra Jadeja.

Rishabh Pant (146) hit his 5th Test hundred while Ravindra Jadeja followed up on an epic 175 with a splendid 104 before Jasprit Bumrah’s cameo helped India to 416.

England’s top-order did not fire either and Bairstow was the only bright spot with a fine 106 off 140 balls as they were bowled out for 284.

Kerala Tourism plans it big to woo visitors during…