Cuttack: Rail Land Development Authority (RLDA) has been mandated to redevelop the Cuttack Railway station and has plans to take up the same on priority.

Shri Ved Parkash Dudeja, Vice Chairman, Rail Land Development Authority (RLDA) inspected the Cuttack Railway station to assess the requirements for redevelopment of the station. RLDA has been mandated to redevelop the Cuttack Railway station and has plans to take up the same on priority and Shri Dudeja paid rich tributes to Netaji Subhash Chandra Bose at his birthplace during his visit to Cuttack on the occasion of his 125th birth anniversary. 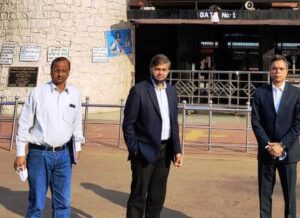 The objective of the re-development is to upgrade the station in line with modern day requirements by providing state-of-the-art passenger amenities, while highlighting its historical significance. The redeveloped station will be equipped with amenities such as segregation of arrival and departure, excellent road connectivity with multi-modal transport integration, security and surveillance systems and many more. The station will be redeveloped on a DBFOT model under the PPP (Public Private Partnership) mode.

Rail Land Development Authority (RLDA) is a statutory body under the Ministry of Railways, for the development of vacant Railway land. It has four key mandates as a part of development i) Leasing of commercial sites ii) Colony redevelopment iii) Station redevelopment and iv) Multi-functional Complex development.

RLDA is currently working on 62 stations in a phased manner while its subsidiary, IRSDC has taken up another 61 stations. The railway stations across India will be redeveloped on a PPP Model as a part of Smart City Projects launched by the Government of India. Currently, the Indian Railway has approximately 43,000 hectares of vacant land across India. RLDA has over 84 commercial (greenfield) sites across India for leasing, and the eligible developers for each will be selected through an open and transparent bid process. RLDA is currently also handling 84 railway colony redevelopment projects and has recently leased out a railway colony in Guwahati for redevelopment.