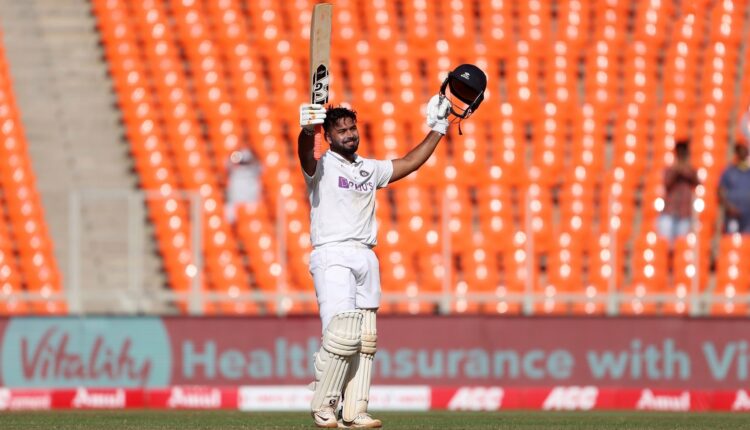 A Rishabh Pant masterclass revived India from a difficult position and set up a big first-innings lead over England at stumps on day two of the final Test in Ahmedabad.

India ended the day at 294/7, a healthy lead of 89, having at one point looked in danger of being bowled out for a lot lesser. That was thanks to Pant, who scored a brilliant 101, and his century partnership with Washington Sundar – their partnership frustrated and tired England out under a scorching Ahmedabad sun.

India went into stumps elated and confident, and the mood was strikingly different from what it was in the morning session when England put up a fight. India resumed the day on 24/1, with Rohit Sharma and Cheteshwar Pujara looking to extend their overnight stand.

But the England bowlers had begun confidently. They ploughed away and had their reward when Pujara was trapped in front by Jack Leach for a 66-ball 17. The wicket triggered a mini-slide. Virat Kohli, the Indian captain, was dismissed for nought, undone by a Ben Stokes short delivery that he edged behind.

Ajinkya Rahane walked out with the intent to attack, and scored a 45-ball 27, putting on a 39-run stand with Rohit. The partnership helped peg England back, but the evergreen Anderson had the decisive say at the stroke of lunch when, with a hint of away movement, he had Rahane caught by Stokes at slip.

England had taken three huge wickets in the morning, and India were precariously placed at 80/4. On resumption, Rohit walked out with Pant, and there ensued a period of attrition. Rohit and Pant wouldn’t get lured into a dangerous shot, and the straight bat was presented to everything the England bowlers threw at them.

Their partnership of 41 suggested India had turned a corner, but England, as they had all day, claimed another wicket at a crucial time. Stokes got one to dangerously dart back in, and Rohit was trapped in front just a run short of a half-century. He reviewed, but replays suggested the bails would be clipped, and the wicket stood on the umpire’s call.

When R Ashwin, whose century had rescued India in a similar situation earlier in the series, was sent back for 13 – Leach had his second wicket – India looked in trouble at 146/6. It was then that the young duo of Pant and Sunder got together.

They saw things through to tea, and on resumption, ensured they weren’t lulled into a false shot. They put away the poor deliveries when they could, making England chase leather out in the dry, scorching heat, and the longer England were made to stay out there, the more tired they became.

Stokes manfully bowled over after over, but Pant and Sundar began opening up and playing their shots as England’s intensity dropped, and soon, they had shifted gears completely. Defence turned into attack in a flash, and having taken 82 deliveries to bring up his half-century, he took just a further 33 deliveries to reach three figures. En route, he played some outrageous shots, including a reverse-sweep of Anderson that forced a smile from the veteran bowler, and a daring sweep for six when he was on 94 to bring up three figures.

India’s lead soared, and despite Pant being dismissed for 101 – he pulled Anderson straight to mid-wicket and was furious with himself – the scoreboard kept ticking as Sundar carried on with Axar Patel for company.

Sundar brought up his third Test fifty, and Patel also finding the fence a couple of times, India were in a solid position by the time stumps were drawn. England will hope to nip the three remaining wickets out quickly on the third morning, but India, at this stage, have a certain advantage.