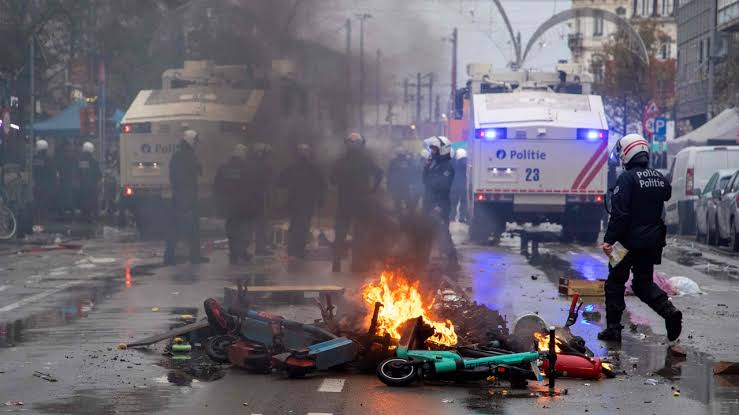 Brussels (Belgium): Police used water cannon and teargas after coming under attack from football supporters who brought havoc to the centre of Brussels on Sunday following Morocco’s shock 2-0 World Cup win over Belgium in Qatar.

Even before the end of the match, “dozens of people, including some wearing hoodies, sought confrontation with the police, which compromised public safety,” Brussels police said in a statement.

Around a hundred police officers were mobilised while residents were warned to avoid certain areas of the city centre. Metro stations were closed and streets blocked to limit the spread of the violence.
“I condemn in the strongest terms the incidents of this afternoon. The police have already firmly intervened. I therefore advise against fans coming to the city centre. The police are doing all they can to maintain public order,” tweeted the mayor of Brussels, Philippe Close.

“The rioters used pyrotechnic material, projectiles, sticks, and set fire on the public highway,” the police said. “Also, a journalist was injured in the face by fireworks. It is for these reasons that it was decided to proceed with a police intervention, with the deployment of water cannon and the use of tear gas,” the police said.