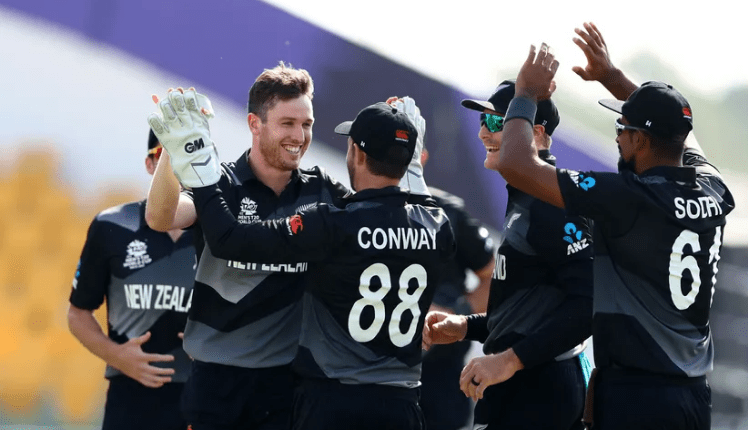 Kane Williamson and Devon Conway’s unbroken 68-run third-wicket stand saw the Black Caps home with 11 balls to spare, securing their place as one of two Group 2 qualifiers alongside Pakistan and eliminating India in the process.

Afghanistan had begun the match with slim qualifying hopes of their own but a poor start with the bat left them on the back foot on 19 for three.

Najibullah Zadran’s sparkling 73 inspired a revival but Trent Boult was exceptional once more with the ball, taking three for 17 to limit Afghanistan to 124 for eight.

And though New Zealand lost both openers in reply, Williamson and Conway – who finished unbeaten on 40 and 36 respectively – combined to steer their side home with a minimum of fuss and set up a semi-final with either England or Australia.

Afghanistan opted to bat upon winning the toss but saw both openers dismissed in quick succession as New Zealand’s fast bowlers gained an early stranglehold.

Mohammad Shahzad was superbly caught behind by Devon Conway attempting an upper-cut off Adam Milne before Trent Boult induced a leading edge from Hazratullah Zazai, whose departure left Afghanistan 12 for two.

Tim Southee was next to strike, trapping Rahmanullah Gurbaz lbw, as the score limped to 23 for three by the end of the powerplay – the third lowest total after six overs in the tournament so far.

Najibullah settled in more smoothly than his predecessors at the crease and got the scoreboard moving with consecutive boundaries off Jimmy Neesham.

Another boundary off Ish Sodhi took Afghanistan past 50 but the spinner struck back in somewhat fortuitous fashion when a short ball was chopped on to his stumps by Gulbadin Naib.

His departure saw Afghanistan reach the halfway point on 56 for four and Najibullah was content to nudge singles before stepping on the accelerator once more in the 14th over.

Two sixes off Mitchell Santner, over long-on and deep midwicket respectively, took the run rate back above six, and Najibullah soon brought up his second half-century of the tournament – this one from 33 balls.

He cleared the ropes again off Southee as Afghanistan looked for valuable late runs, though the seamer picked up his second scalp by holding a return catch to dismiss Mohammad Nabi for 14.

The ever-reliable Boult then brought Najibullah’s fine innings to an end, Neesham taking a fine diving catch at long-off, and also accounted for Karim Janat in a typically clinical death over.

Neesham followed up by conceding just two from the final over, which also included the wicket of Rashid Khan from its final ball as Afghanistan set the Black Caps 125 to win.

Knowing victory would be enough on its own, without net run-rate entering the equation, Martin Guptill and Daryl Mitchell made a steady start to the chase to lay the foundations.

Mitchell cut the returning Mujeeb Ur Rahman to the point boundary but with the opening partnership worth 26, the spinner had his revenge in his next over by finding the batter’s outside edge.

Williamson joined Guptill to safely negotiate the remainder of the powerplay, which concluded with consecutive Guptill boundaries off Mujeeb to take New Zealand to 45 for one.

But the opener found life tougher against Rashid and fell aiming a heave at the spinner, who wheeled away to celebrate his 400th T20 wicket and give his side fresh hope.

With Nabi’s off-breaks proving just as hard to get away, the Black Caps reached the halfway point of the chase on 61 for two – just five runs better off than Afghanistan at the same stage.

Afghanistan continued to apply pressure, bringing close fielders in as the required rate ticked towards seven an over, and Williamson’s clip through the leg-side off Rashid midway through the 12th over brought his side’s first boundary for 33 balls.

A typically elegant drive off Gulbadin brought the Black Caps skipper four more and Conway then made effective use of the sweep against Nabi, picking up consecutive boundaries before reverse sweeping Rashid through third man.

The 50-run partnership came up in the 16th over as the pair continued to guide their side towards the finish line and Conway knocked the winning single down the ground from the first ball of the 19th over to seal his side’s progress.

New Zealand will now wait until the conclusion of Pakistan’s clash with Scotland to discover their semi-final opponents.

Should Pakistan win, New Zealand will finish second and take on England in Semi Final 1 in Abu Dhabi on 10 November.

If Scotland are successful and the Black Caps finish top of the group, they will take on Australia in Semi Final 2 in Dubai the following day.