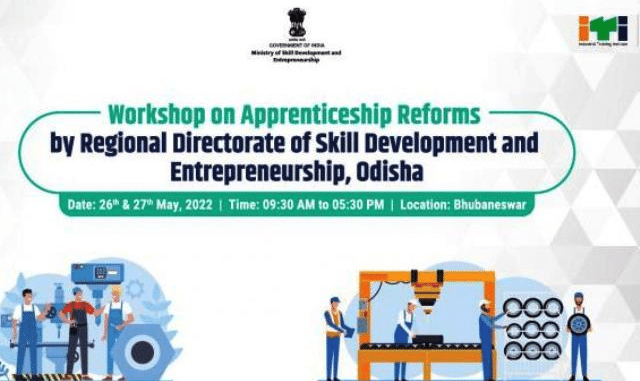 Bhubaneswar: With an aim to raise awareness about the new and improved apprenticeship reforms by the Ministry of Skill Development and Entrepreneurship, the Regional Directorate of Skill Development and Entrepreneurship (RDSDE), Odisha organised a two-day workshop on the Apprenticeship Reforms at the World Skill Centre Mancheshwar, Bhubaneswar. The workshop was aimed at the capacity building of stakeholders on the new changes implemented within the country’s apprenticeship model.

Furthermore, as announced by the Union Minister of Education and Skill Development & Entrepreneurship, Dharmendra Pradhan, a total of 250 workshops will be conducted across the country to create a robust awareness about the reforms.

While the major discussion points were around the examination modules, timelines, and payment gateway, a few brief points are listed below:

Lauding the initiative, Atul Kumar Tiwari, Special Secretary, Ministry of Skill Development & Entrepreneurship; and Director General, Directorate General of Training said, “Around 62.5% of India’s working-age population is aged between 15 and 59 years which is an attractive proposition to drive India’s economic engine. With apprenticeship training, which is considered the best model for skill acquisition, we can train the youth quickly, efficiently, and adequately in their transition from the classroom to the factory floor, providing opportunities for underutilized communities. I am hopeful that, by organising these workshops we will be able to encourage the industries to partner with us and add more apprentices to their workforce.”

No Agency Can Stop Construction Work Because ‘It Is Mahaprabhu’s Work’ : Pinaki Mishra