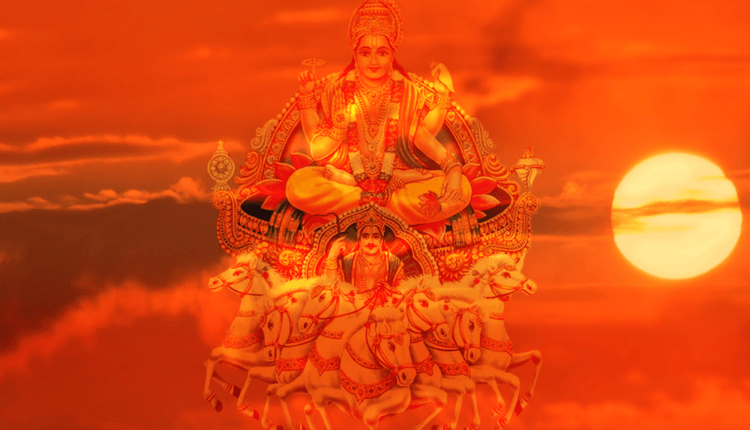 New Delhi: Ratha Saptami is observed on the seventh day (Saptami Tithi) of Magha, Shukla Paksha (brighter phase of the Lunar cycle). It is believed that Lord Surya Dev started enlightening the whole world on Ratha Saptami day which was considered as the birthday of God Surya. Hence this day is also known as Surya Jayanti or Magha Saptami.

It is believed that by worshipping Lord Surya and observing fast on this day one can get rid of all types of sins.

On the day of Ratha Saptami, devotees get up before sunrise and take a holy bath. It is believed that taking a sacred bath during this time, will free a person from all illnesses and ailments and bestow good health. Therefore, the festival is also popularly known as ‘Arogya Saptami’.

After completing the bath, devotees offer ‘Arghyadan’ to Sun God at the time of sunrise. After that, light up a lamp and worship Sun God by offering red flowers, Kapoor, and dhoop. Chanting ‘Gayatri Mantra’ and reciting ‘Surya Sahasranaam’, ‘Adityahridayam’ or ‘Suryashtakam’ or is considered very auspicious on this day.

Ratha Saptami is considered as auspicious as Surya Grahan for Dan-Punya activities. It is believed that seven types of sins are done, knowingly, unknowingly, by words, body, mind, in current birth, and in previous births are purged by worshipping Lord Surya on this day.

According to Hindu religion, the Sun God was born to Sage Kashyapa and Aditi on the Saptami Tithi of Magha, Shukla Paksha. Hence, Ratha Saptami Day is also known as Surya Jayanti. Devotees worship the Sun God on this day and rise early to take a bath during Arunodaya (sunrise). This ritual is one of the most crucial aspects of the holy day. They believe that one can get rid from the sins they may have committed by words, actions, intentionally, unintentionally or theoretically, in the previous birth or the present one, by taking a bath in a sacred river on this auspicious day.

After the ritualistic holy dip, devotees offer Arghya (water) to the Sun God. They hold a kalash (small pot) filled with water and gently tilting it towards him. After Arghya is performed, they offer an oil/ghee lamp, red flowers, incense and an ignited camphor to the Sun God while chanting mantras dedicated to him.

According to a local legend, the twelve wheels of the Sun God’s chariot represents Zodiac signs and the seven horses that carry his chariot symbolise the seven hues of the rainbow. Another school of thought also suggests that the seven horses signify the seven days of the week.