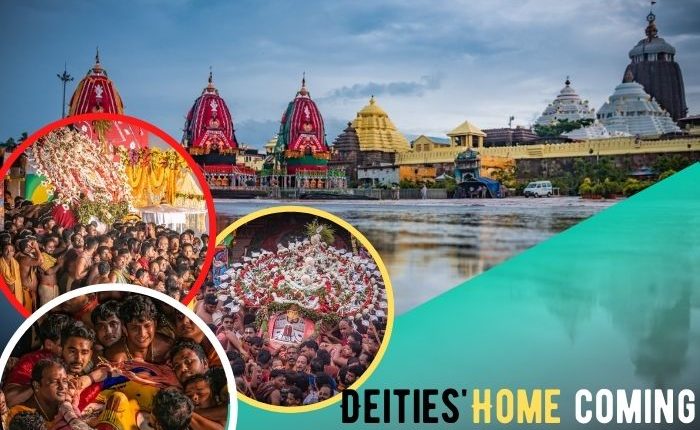 Puri: The world-famous Rath Yatra concluded on Friday with the re-entry of Lord Jagannath and his siblings into the Srimandir in a special ritual called Niladri Bije.

On this day, the Lords enter the sanctum sanctorum. After the Lords returned from Gundicha temple, the rituals of ‘Suna Besha’ and ‘Adhara Pana’ were performed on the chariots.

Daita servitors conducted the Pahandi procession amidst the beating of cymbals, trumpets, drums, and bugles and presentation of Gotipua and Odissi dances.

This ritual is conducted after the 12th day of Rath Yatra in which the divine siblings along with Lord Sudarshan are taken to the temple and seated on the Ratna Singhasana (bejeweled throne) in a ceremonial procession.

Niladri bije is the ceremony of Lord Jagannath’s return with his siblings from the Raths to the main temple in Goti Pahandi. Among all the rituals of Jagannath Rath Yatra, the most interesting and last one seems to be Niladri bije.

Here ends the enormous car festival of the Gods- Jagannath Rath Yatra. This year, the Rath Yatra was organised without the participation of the devotees on the Supreme Court’s order due to COVID-19.