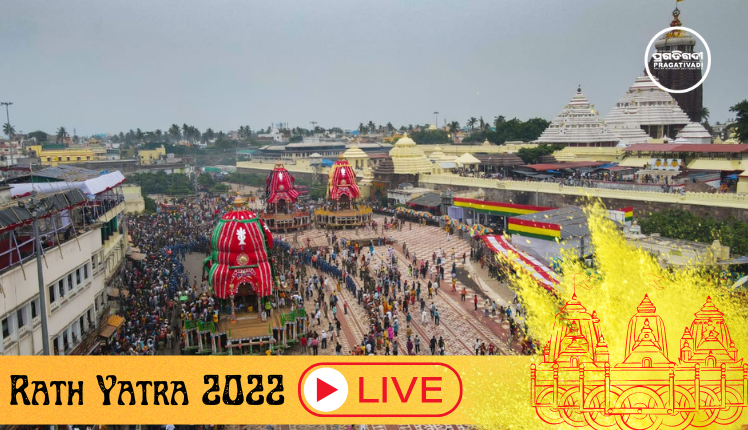 The chariots of the three deities—Lord Jagannath, Lord Balabhadra and Devi Subhadra— arrived at the Saradhabali near their destination Sri Gundicha temple this evening, as the Rath Yatra ended peacefully. 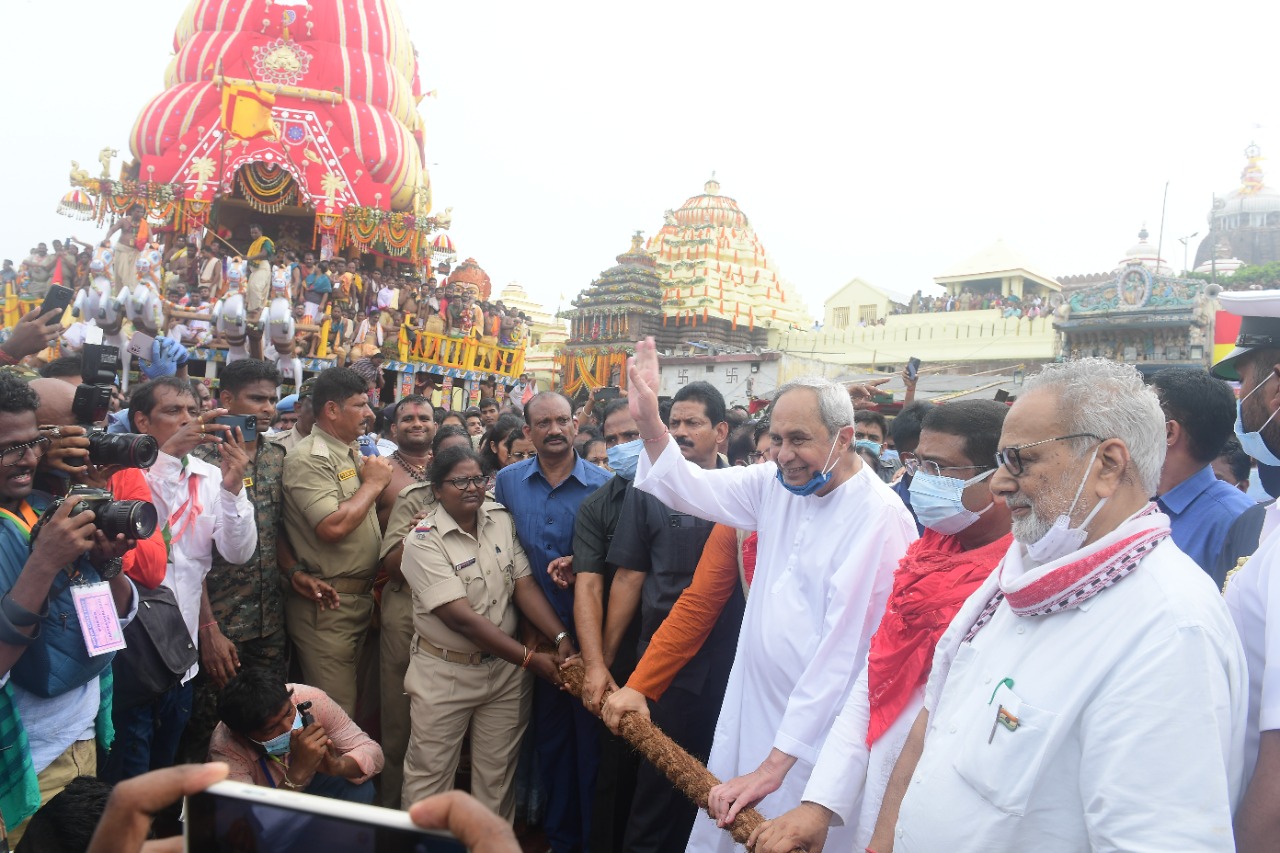 Odisha Governor Ganeshi Lal and Chief Minister Naveen Patnaik had a darshan of Lord Jagannath and siblings on the chariots during the Rath Yatra in Puri on Friday as it is being held in the presence of devotees after a gap of two years due to the Covid-19 pandemic. 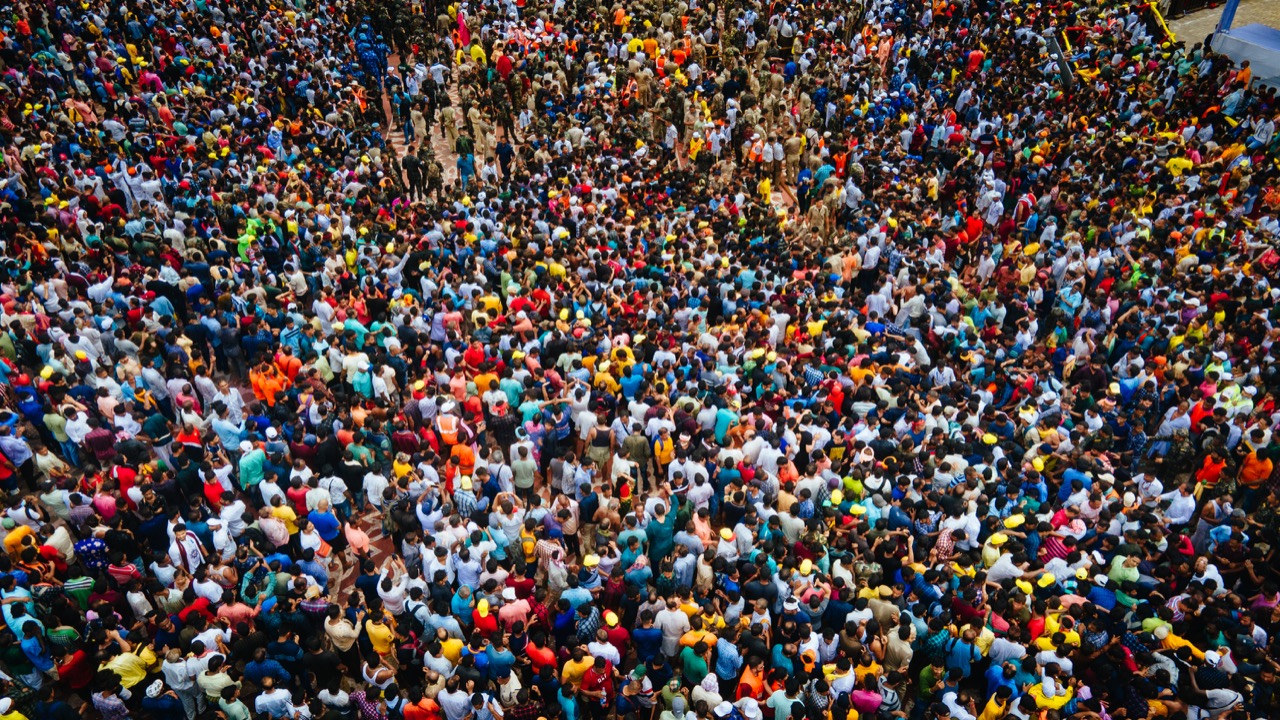 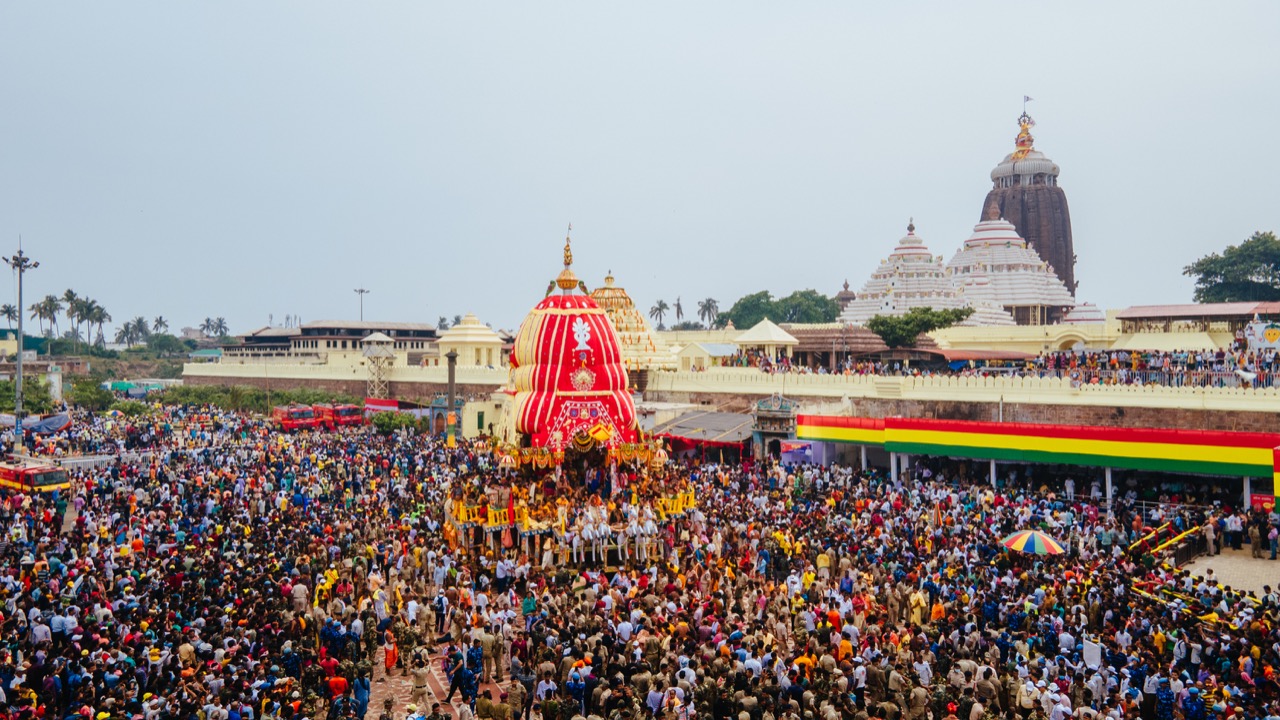 Lord Jagannath decked up on his Nandighosha chariot began his journey to Gundicha Temple. A massive stretch of crowd ushered the Lord of the Universe’s rath on the Puri Bada Danda. 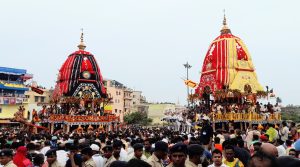 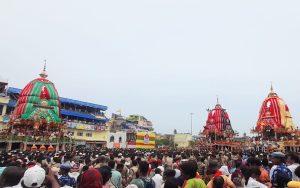 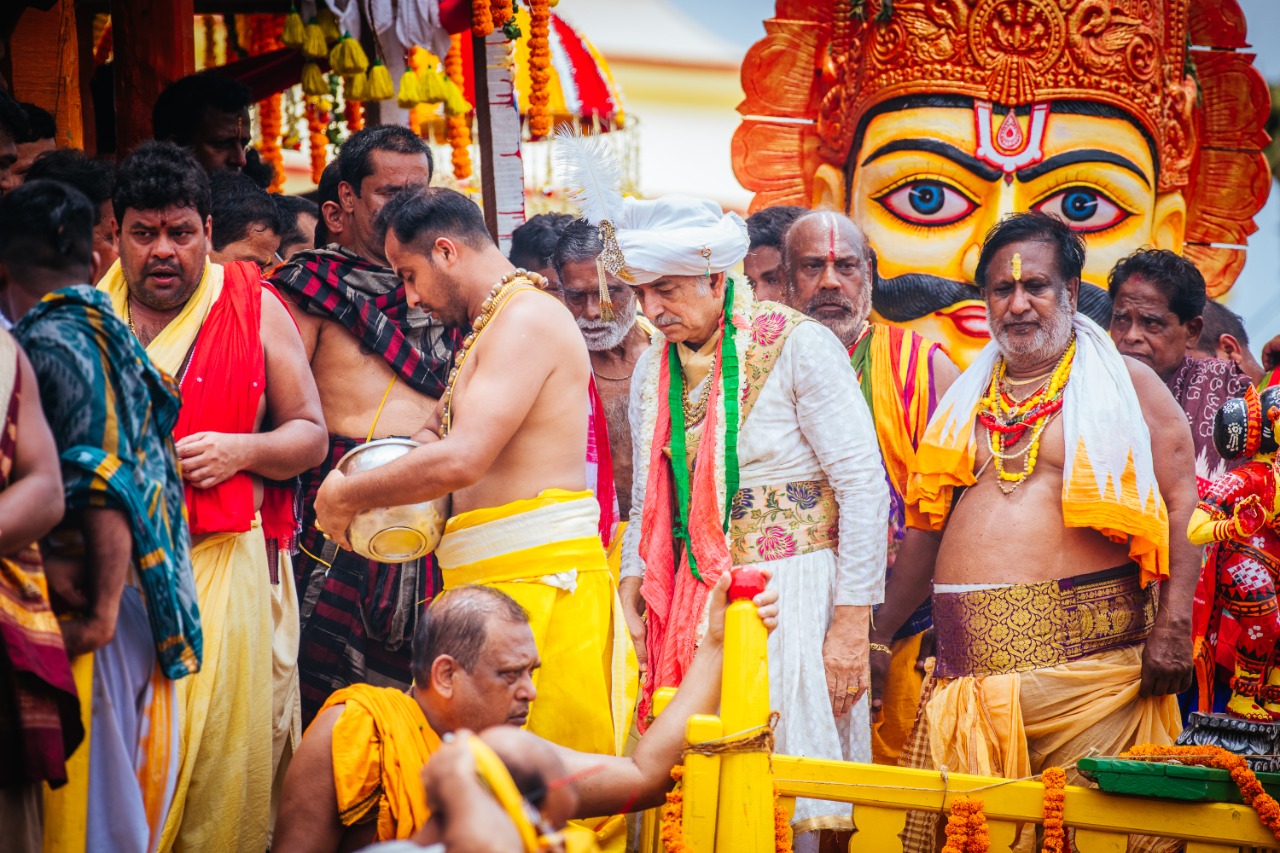 As per tradition, the King swept the floors of the raths with a golden handle broom as the foremost servitor of the Lords. 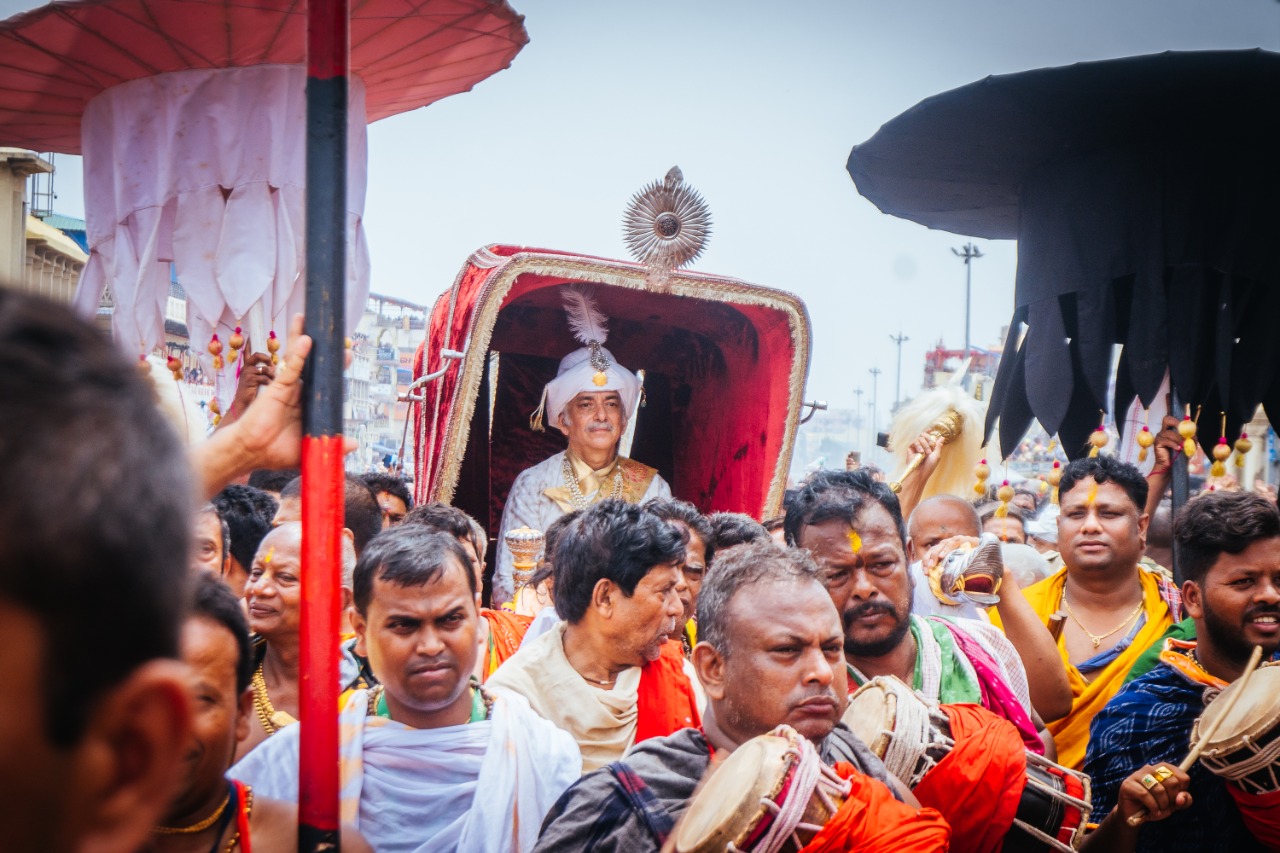 Gajapati Maharaj Dibyasingha Deb, the ‘adyasevak'(foremost servitor) of Lord Jagannath, arrived. He will perform the “Chhera Pahanra”on the chariots. 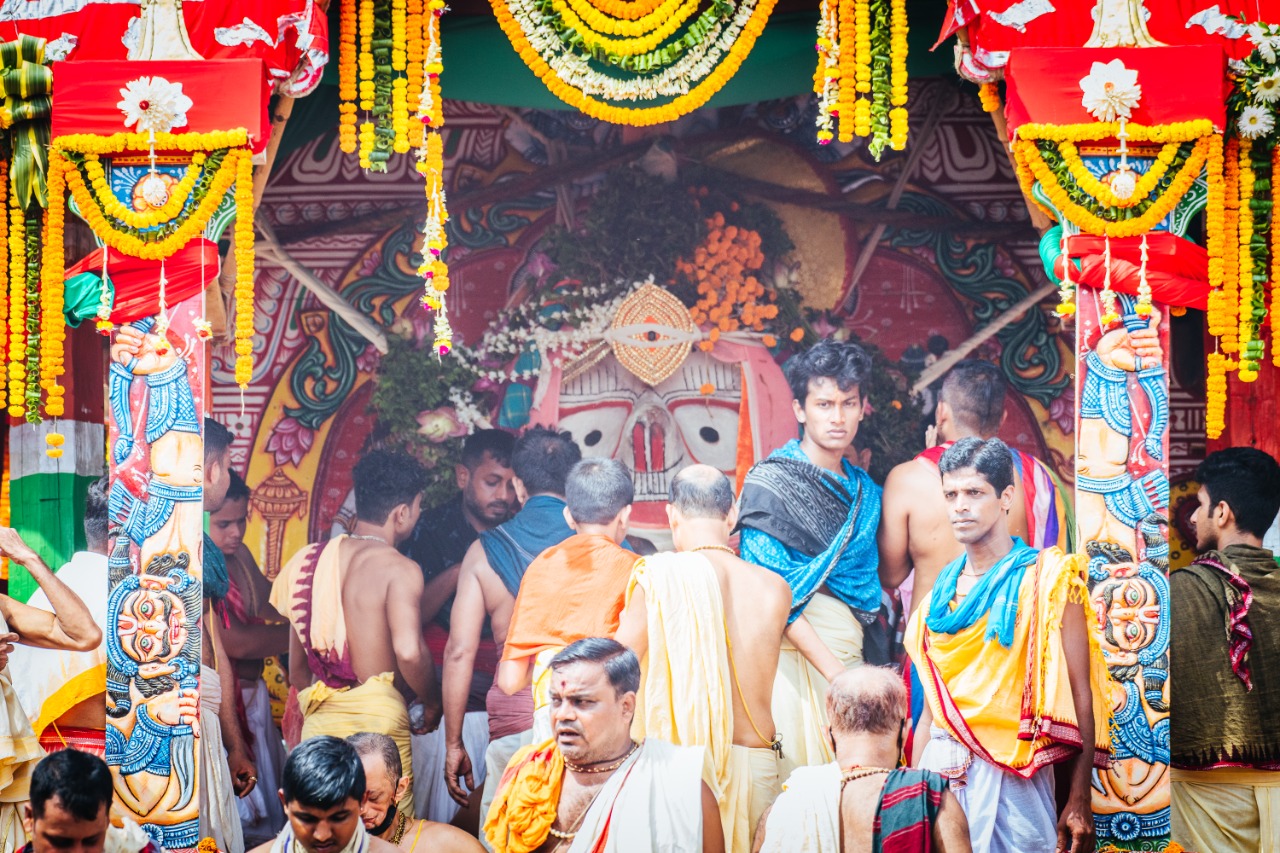 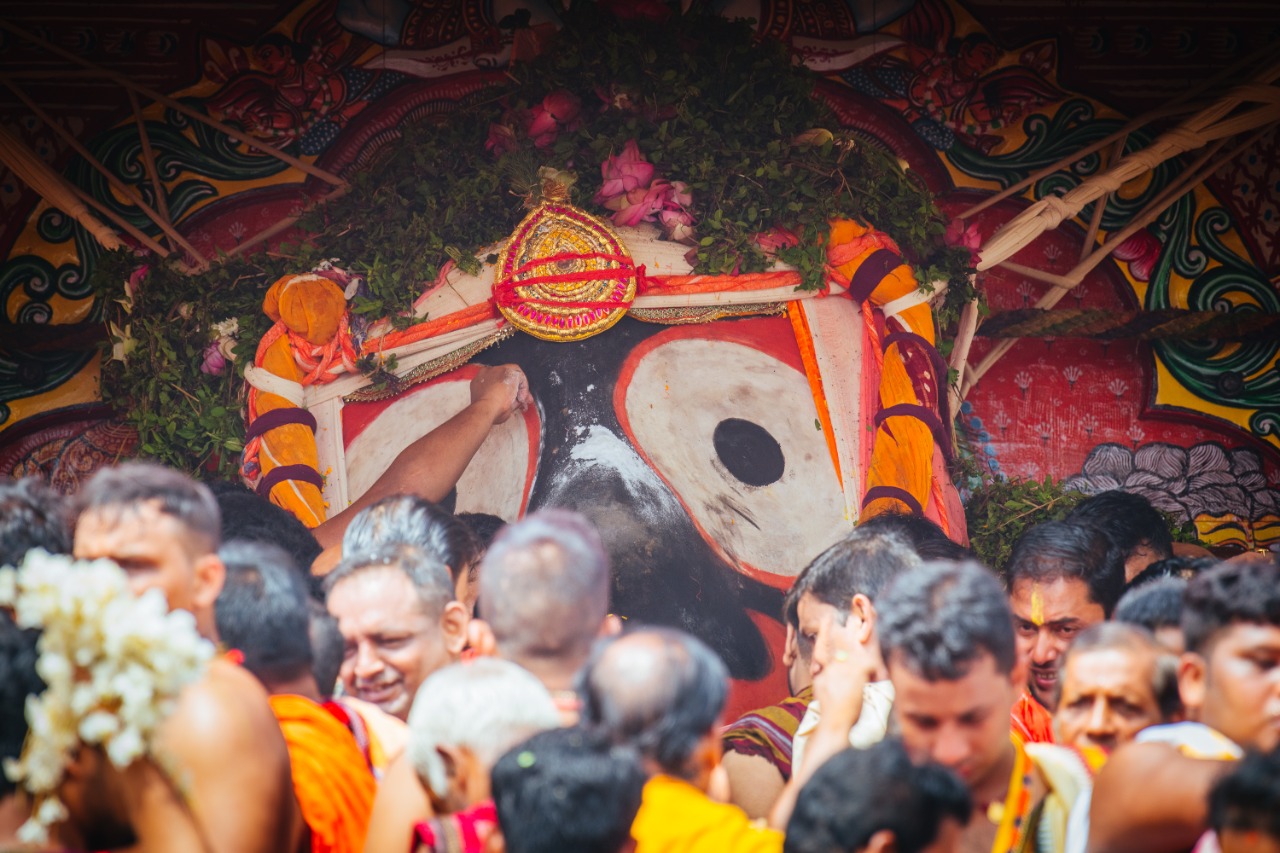 Shankaracharya pays obeisance to the Trinity 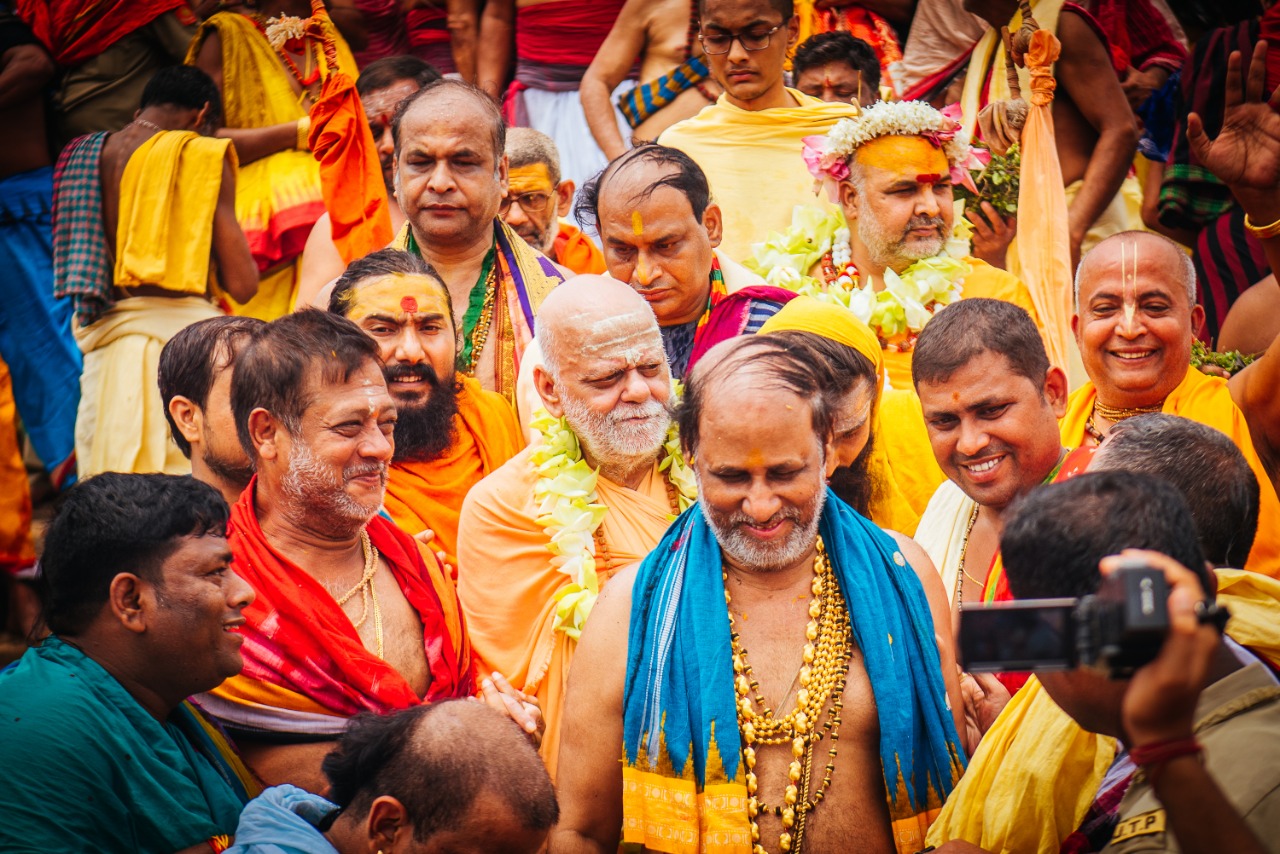 Puri Shankaracharya Nischalananda Saraswati offered his prayers to the three deities atop their respective chariots before the commencement of pulling of chariots. 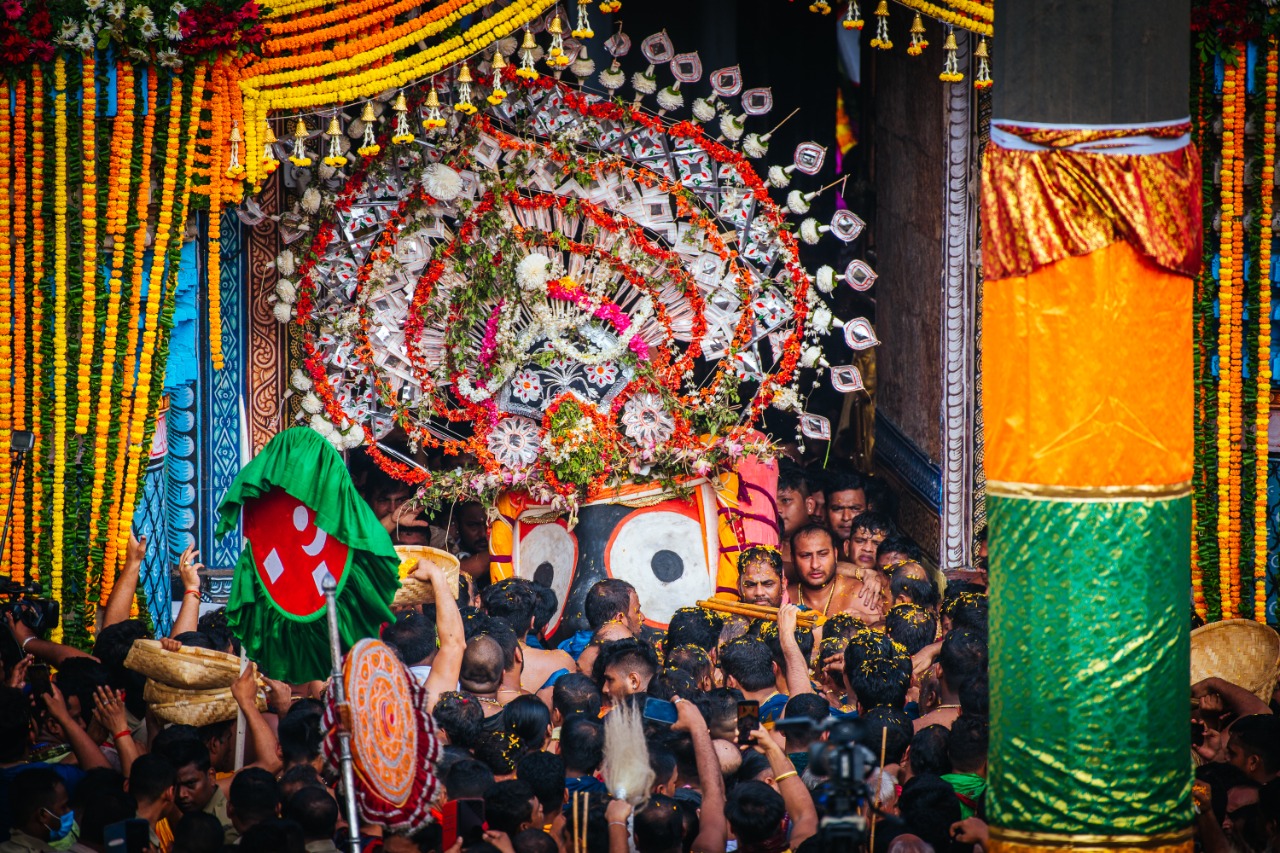 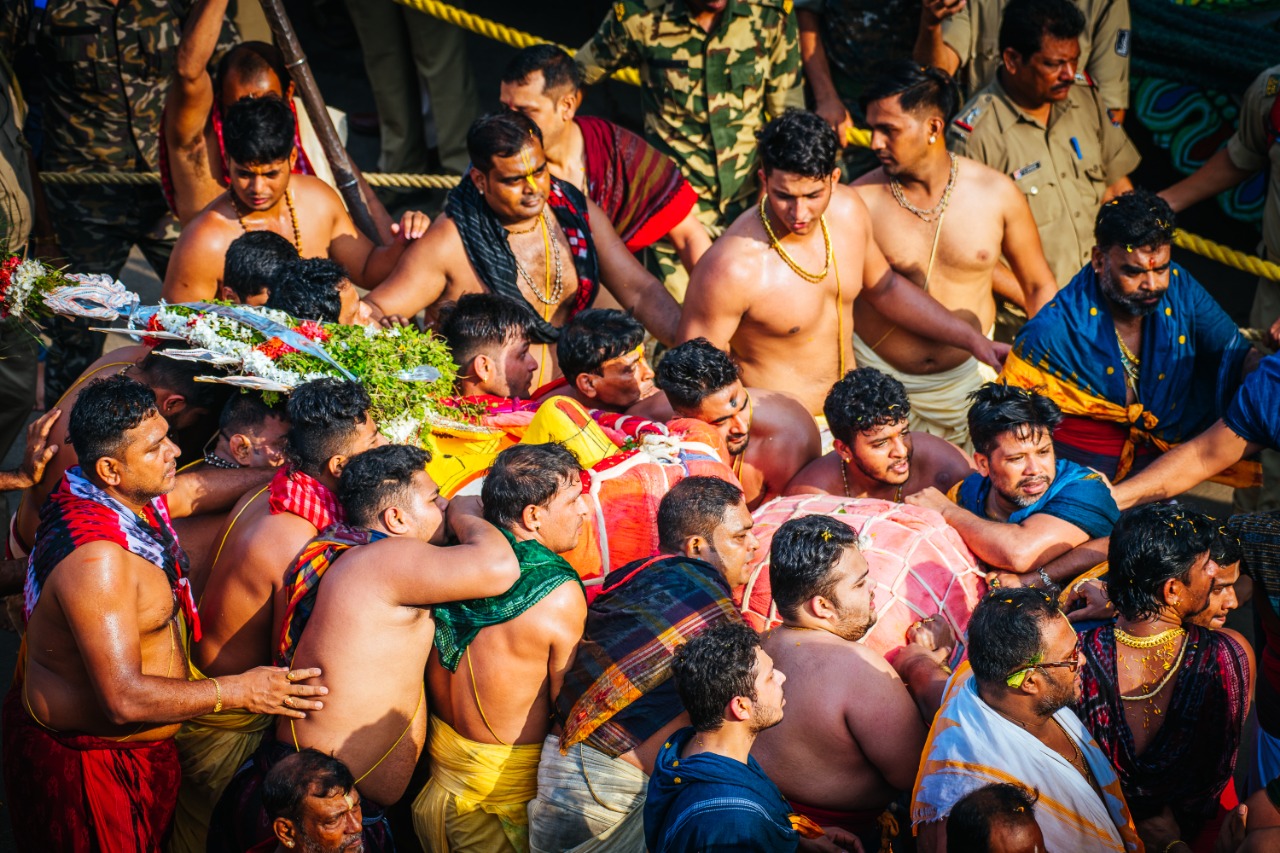 After Lord Balabhadra, Devi Subhadra is being escorted to her chariot- ‘Debadalana’ in ceremonial ‘Pahandi’. 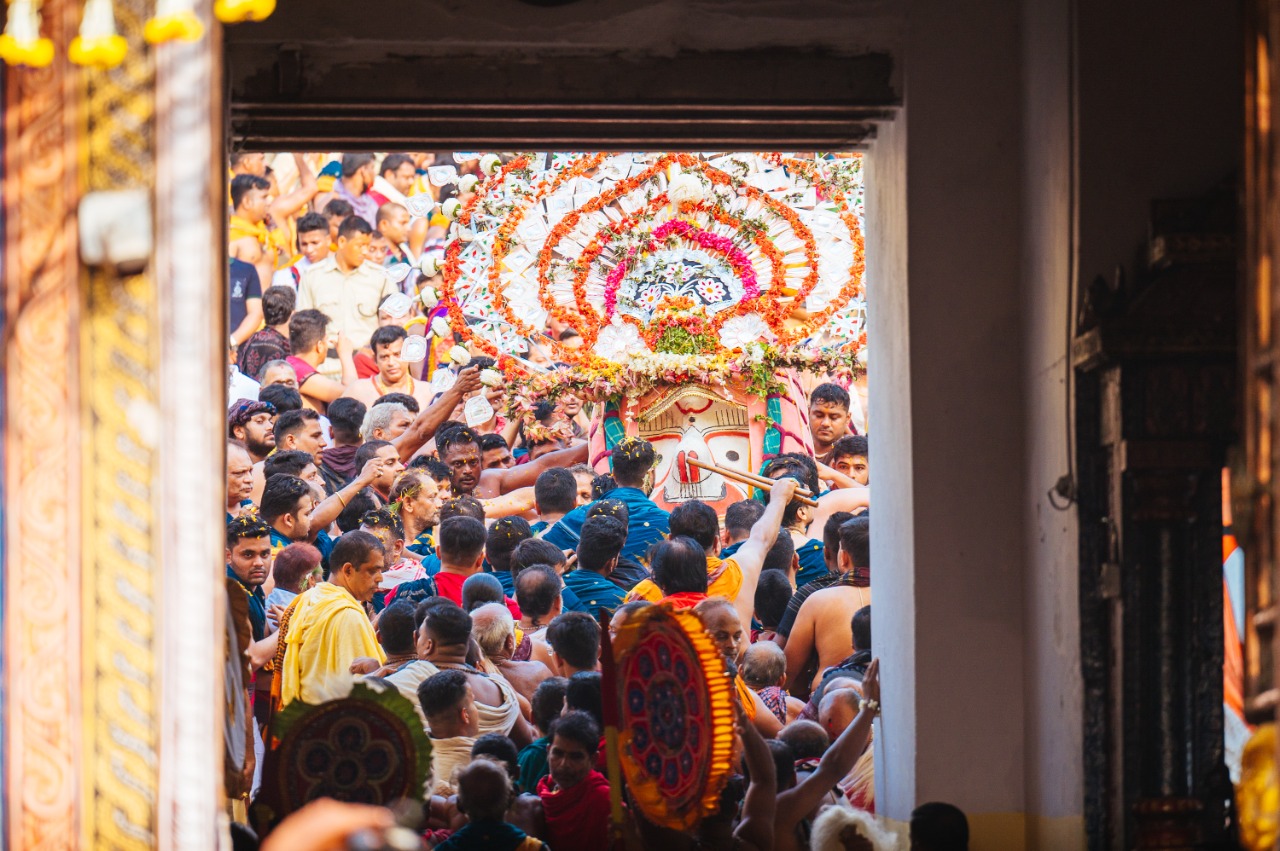 Pahandi of Lord Balabhadra also began ahead of the schedule at Puri Srimandir. The Bada Thakura is being ushered to his Taladhwaja chariot in a magnificent procession amid the chants of Haribol. 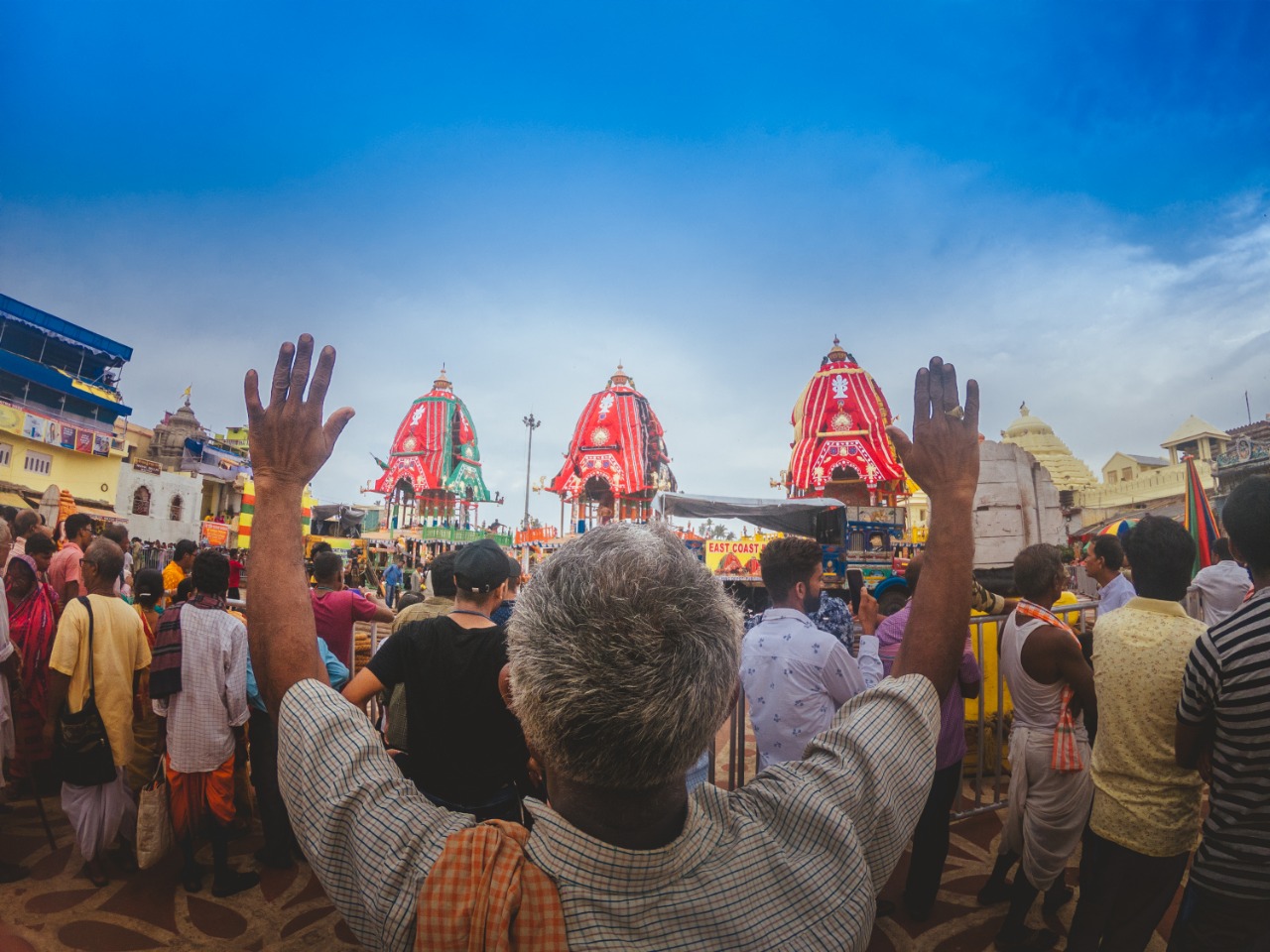 At first, Chakraraj Sudarsan was ushered to Nandighosha chariot on Dhadi Pahandi procession followed by the Pahandi of Lord Balabhadra to Taladhwaja chariot. Later Devi Subhadra and Lord Jagannath were placed atop their respective chariots.

Spirituality is at its peak on Bada Danda (Grand Road) with reverberating in the beatings of gongs, cymbals and chants of Jai Jagannath.

Kalia Thakura steps out of Srimandir to make way for his splendid Nandighosa chariot. Lord Jagannath will accompany his elder brother Balabhadra and Devi Subhadra on a nine-day sojourn to Gundicha Temple.

Mailama Niti of Lord Jagannath was completed by 3.30 am. Other rituals proceeded smoothly 3 hours ahead of the schedule.