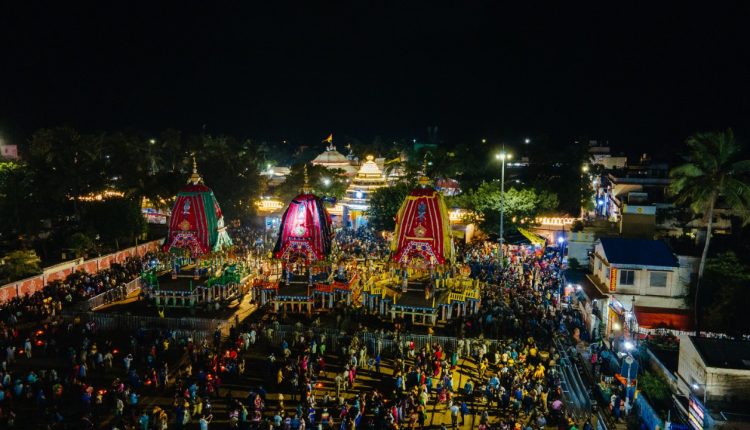 Puri: The ‘Dakhina Moda’ ritual of the three chariots, Nandighosha, Taladhwaja and Darpadalana of Lord Jagannath, Lord Balabhadra and Devi Subhadra was held at the Saradhabali on Wednesday in Puri.

With the execution of this ritual, the preparations for the Bahuda Yatra, the return journey of Lord Jagannath and siblings from Gundicha temple to Srimandira has begun. It is to be noted that the three deities have made the annual sojourn to Gundicha temple on Rath Yatra.

Earlier today, following the Sakala Dhupa ritual in the Gundicha temple the ‘Angyamala Bije’ was held in which three Puja Pandas came in a procession amid sounds of bell and kahali and chhatra (umbrella) along with the Angyamala, the symbol of authorisation.

As per reports, the ritual began with Darpadalana chariot of Goddess Subhadra followed by the Chariot of Lord Balabhadra and ended with Nandighosha, the chariot of Lord Jagannath.