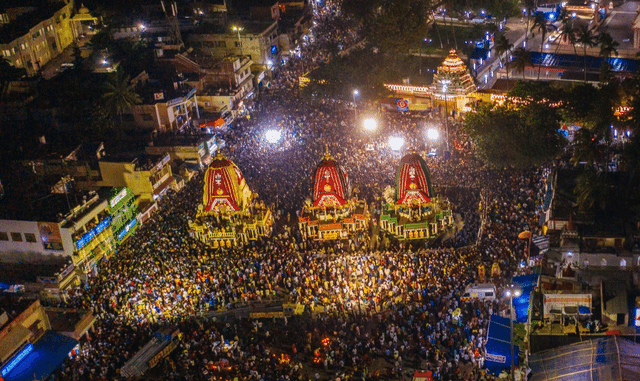 Puri/Bhubaneswar: The three gigantic chariots of the Holy Trinity— Lord Balabhadra, Devi Subhadra and Lord Jagannath reached Puri Gundicha temple and have now been parked at Saradha Bali in front of the temple.

As the participation of devotees in the Rath Yatra has been allowed this time after a gap of two years following the Covid pandemic, around a million devotees from across the country thronged the pilgrim town of Puri on Friday to pull the three wooden chariots carrying Lord Jagannath and his siblings on the main thoroughfare.

During the annual Rath Yatra, the three deities come out of the sanctum sanctorum of the Jagannath temple through a ceremonial procession for the much-awaited journey to Gundicha temple.

According to the Jagannath cult, the Gundicha temple is considered as the aunt’s house of Lord Jagannath and his siblings where they go for an annual nine-day sojourn. The Chariots of the Trinity stand in the Sardha Bali during Rath Yatra. So the Sand of Sardha Bali is very auspicious. The devotees put the holy sand in their head and body to get the blessing of the Lord Jagannath.

Ratha Yatra, also known as the Chariot Celebration of Lord Jagannath, Devi Subhadra, and Lord Balabhadra, is being observed today, July 1. It is the most prominent Hindu festival in the Puri city of Odisha. This festival takes place every year on the second day of the Shukla Paksha in the months of June or July.