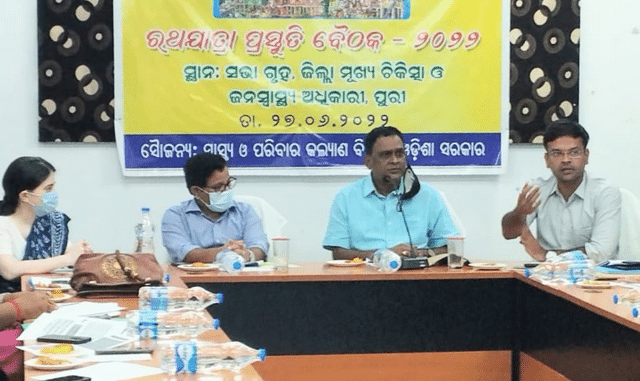 Puri: With just two days left for the world-famous Rath Yatra, a nine-day-long annual sojourn of Lord Jagannath, Lord Balabhadra and Goddess Subhadra, Puri district administration is in readiness to host lakhs of devotees expected to throng the Pilgrim town to have a glimpse of the Holy Trinity.

It may be mentioned here this year the devotes will be allowed to take part in the chariot pulling which has halted for the last two years in order to curb cases of COVID-19. While the authorities expect a huge footfall of devotees, wearing masks has been made mandatory in Puri during the Rath Yatra.

Das stated that the decision has been taken as a precautionary measure to keep the COVID-19 infection at bay during the Rath Yatra.

Further, the Health Minister added that in compliance with the direction of Chief Minister Naveen Patnaik, the state government and the district administration have made elaborate arrangements to ensure the smooth conduct of Rath Yatra.

For Rath Yatra this year, 30 first aid centres, 58 ambulances, 144 stretchers, 785 volunteers, 145 doctors, 20 food safety officer, 40 pharmacists, 30 nurses, 35 health workers will be deployed. A total of 287 general beds and 26 AC-Beds for heatstroke patients have been arranged at the DHH. Besides, six lakhs ORS packets are also in stock, it was learned during the review meeting.

As the Rath Yatra is to be held in the presence of devotees after two years, Puri DHH has prepped 50 extra beds including special OT, 50 ICU beds and stockpiled medicines. Emphasis has also been laid on providing 24-hour services by volunteers and medical officers, including ambulances.