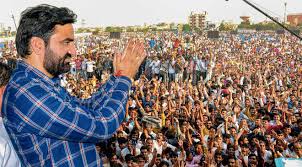 This is a setback to the BJP as it is the second party to do so over the farm laws.

RLP chief Hanuman Beniwal, announcing the split from NDA at a rally in Shahjahanpur in Alwar district, said he is leaving NDA (National Democratic Alliance) in protest against the three farm laws. These laws are anti-farmer, he added.

Beniwal, however, made it clear that he will not forge an alliance with the Congress party.

The RLP has become the second party to quit the BJP-led ruling alliance in protest against the contentious farm laws. Earlier in September, the Shiromani Akali Dal, BJP’s key ally in Punjab, had walked out of the NDA following differences with the Centre over farm laws.

Last week, Beniwal had tendered his resignation from three parliamentary committees to support the ongoing agitation.