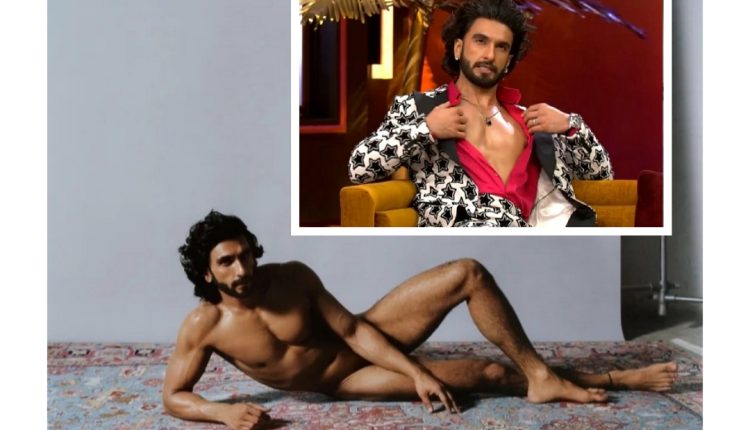 Ranveer Singh’s nude photoshoot: Memes surface; Mimi Chakraborty asks ‘what if it was a woman’

Mumbai: Ranveer Singh surprised his fans when he posed for a nude photoshoot, in a probable homage to Burt Reynolds’ iconic photoshoot for Cosmopolitan magazine in 1972.

Talking about the shoot, Ranveer tells Paper Magazine, “It’s so easy for me to be physically naked, but in some of my performances I’ve been damn f*****g naked. You can see my f*****g soul. How naked is that? That’s being actually naked. I can be naked in front of a thousand people, I don’t give a sh*t. It’s just that they get uncomfortable.”

During the interview, Ranveer also opened up about how he has a ‘dystopian and cynical’ understanding of the world, “Everything’s gone to sh*t. I understand that this journey of life is an agonizing f*****g journey. It’s agonizing to just exist.”

“I’m just getting started. For the past 10 years (he made his debut with the 2010 release Band Baaja Baaraat) I’ve only been learning, I’ve been collecting the tools of my craft. Let’s just say I’ve accumulated enough to fill my tool kit, it’s now ready. I’m ready,” Ranveer said.

TMC MP and Bengali star Mimi Chakraborty has reacted to Ranveer Singh’s latest nude photoshoot. The Simmba actor bared it all for a shoot for PAPER magazine. The photos have gone viral. The way the pictures were received has gotten Mimi thinking if the appreciation would have been the same if a woman did a similar shoot.

We talk about Equality where is that now??!!!!You know right its your perspective that can change something or destroy it https://t.co/xFCpF3qMcr this case lets broaden our perspective coz that body comes with a lot of sacrifice trust me🙏(No salt, No sugar, No carbs…) 1/2

We are all aware that desi Twitter can make memes out of literally anything, and this photoshoot was definitely a gold mine.

Ranveer Singh for Paper Magazine, oh this will definitely break the internet pic.twitter.com/q0Vbcu20Fi

The Creation of #RanveerSingh pic.twitter.com/lCpXQApL9g

Me after spending my entire salary on swiggy & zomato #RanveerSingh pic.twitter.com/brwVN7rZeU

Cockroach when I turn on light at night : pic.twitter.com/pLgyG97aV8

3 year old me when i don't want to take a bath…#RanveerSingh pic.twitter.com/XbXpvmE5Hw

No Role Of Sainik Schools In Implementation Of Agnipath Scheme: Minister

In the Soop Friendcation on Disney Plus Hotstar ft Wooga Squad; Details here