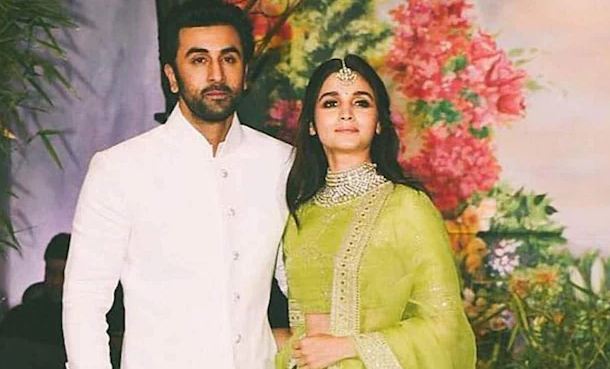 Ranbir Kapoor and Alia Bhatt tie the knot in Mumbai

Alia Bhatt and Ranbir Kapoor are now married.  The two tied the nuptial knot in an intimate ceremony as per proper Punjabi traditions amidst close friends and family on Thursday in Mumbai at Ranbir Kapoor’s house Vastu.

For Alia and Ranbir’s sangeet, Neetu Kapoor, Samara Sahni, Nitasha Nanda, Karisma Kapoor danced their heart out. They did a special performance for the couple. The video of the same has gone viral.

As Alia and Ranbir have now upgraded their relationship to wife and husband, ‘Mr & Mrs Kapoor’ has been trending on Twitter!

Though the tinsel town’s most anticipated wedding is finally over, Ranbir and Alia are yet to make an official public appearance as a married couple. If reports are to be believed, Ranbir and Alia will pose as newlyweds for the paparazzi at 7 pm today.

Reports also suggest that the couple will host a grand reception at the luxury hotel Taj Mahal Palace in Mumbai on April 17.

On Wednesday, the pre-wedding festivities of the highly awaited wedding took place at Ranbir’s residence Vastu in Mumbai’s Pali Hills. The festivities kickstarted with Ganesh Puja followed by the Mehendi ceremony and Sangeet.

Many guests were spotted arriving for the functions but they were mainly family members like Soni Razdan, Shaheen Bhatt, Pooja Bhatt, and many other members of the Kapoor and Bhatt family. Besides them, Akansha Ranjan, Amitabh Bachchan’s daughter Shweta Nanda and her husband, and others were also clicked as they reached the venue.