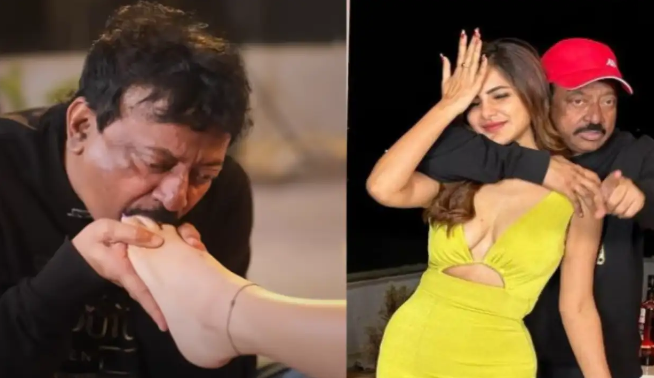 New Delhi: Filmmaker Ram Gopal Varma created storm on the internet as he shared a photo and video of kissing Ashu Reddy’s feet as she interviewed him for his upcoming film Dangerous.

RGV took to his Twitter and shared a pic, where he is seen sitting on a floor and caressing Ashu Reddy’s feet. He later also shared the interview video on his YouTube Channel. On December 6, RGV posted a pic on Twitter of kissing the feet of actress Ashu Reddy. He wrote, ‘Where is the DANGEROUS mark in ASHU REDDY. Full video in 30 minutes at 9.30 pm.”

Check Out RGV And Ashu Reddy’s Pics And Video Here:

Where is the DANGEROUS mark in ASHU REDDY ..Full video in 30 mints at 9.30 pm pic.twitter.com/34lp6eHjC5

Here is my Full video with the DANGEROUS ASHU REDDY…Watch at your own RISK https://t.co/MsOGO6uo54

For the unversed, Ashu Reddy participated in the third season of the popular reality show, Bigg Boss Telugu season 3. Later on, she went on to become the host of the show, Happy Days.