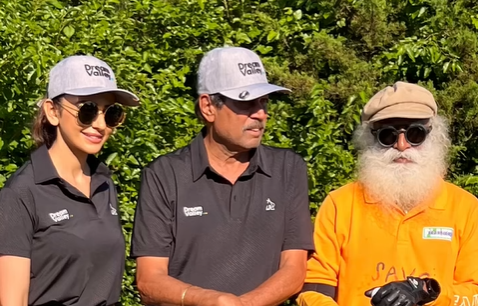 New Delhi: Rakul Preet Singh is one of the well-known Indian actors in the entertainment industry. Rakul Preet made her debut in the 2014 film Yaariyan, there’s been no looking back for her.

Now the actress was joined by cricket legend Kapil Dev and Sadhguru. Sharing the video, the actress captioned it: “What better than kickstarting ATA convention at Washington DC with @sadhguru @therealkapildev.”

The video features Rakul playing golf, while the trio was also seen posing for photos. In it, the actress donned an all-black outfit, Kapil wore a black t-shirt and paired it with brown pants. Sadhguru, on the other hand, wore a yellow t-shirt and pants.

On the work front, Rakul has many interesting films in her pipeline. She will star next in Anubhuti Kashyap’s Doctor G, Indra Kumar’s Thank God, and Chhatriwali.