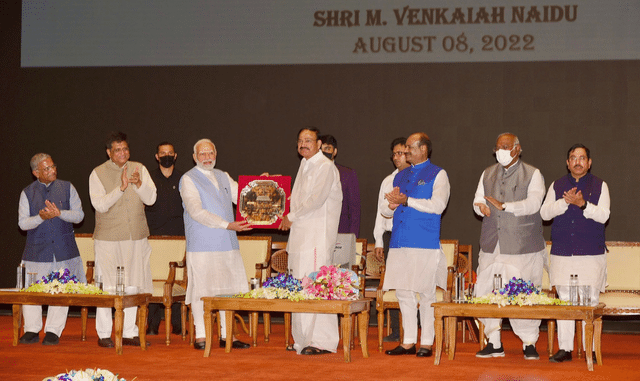 New Delhi: Prime Minister Narendra Modi today said, Rajya Sabha Chairman M. Venkaiah Naidu’s leadership, ability and discipline have led the Upper House to attain new heights. Delivering a farewell speech for Mr. Naidu in the Rajya Sabha, Mr. Modi said, the Upper House productivity has increased 70 per cent during his tenure. The Prime Minister said, 177 bills were either passed or discussed in the House during Mr Naidu’s tenure. He said, Mr. Naidu’s responsibility to lead the Rajya Sabha might be ending now but the nation, as well as workers of public life, will continue to receive benefits of his experiences.

The Prime Minister said, the youth can learn a lot about society, country and democracy from the experiences of Mr. Naidu. He said, India is celebrating this year’s Independence Day at a time when the country’s President, the Vice President, the Speaker and the Prime Minister are all those persons who were born in an independent India, and all of them hail from very ordinary backgrounds. Mr Modi lauded Mr. Naidu’s leadership as the BJP chief, for his hard work in the Union Cabinet or his grace as the Vice President.

The Prime Minister said Mr. Naidu made tremendous efforts to promote Indian languages in the Rajya Sabha. He said, the legacy and yardsticks set up by him will always inspire the members. Mr. Modi said, the outgoing Chairman’s one liners are also wit-liners and his command over languages has always been great.

In his farewell speech, Chairman M. Venkaiah Naidu said, the Upper House has a greater responsibility as the entire world is watching India. He appealed to the members to maintain decency, dignity and decorum of the House. Mr. Naidu said people want the House to discuss and debate, and they do not want disruption. He said, he tried to accommodate all sides and did his best to fulfill his responsibilities as the Chairman. Highlighting the importance of the mother language, he said, it should be used at every level extensively.

Leader of the House, Piyush Goyal lauded Mr. Naidu, saying that crucial legislations were passed during his tenure. He said, Mr. Naidu not only promoted the mother tongue but also used it wherever he got a chance.

Recalling the political career of M Venkaiah Naidu, Leader of the Opposition Mallikarjun Kharge said, he remained a member of the Rajya Sabha for 19 years. He said, Mr. Naidu remained active in politics from his student life. He lauded Mr. Naidu for discharging his responsibilities efficiently under pressure. He said, Mr. Naidu also spoke about consensus on the Women’s Reservation Bill and other issues. He appreciated Mr. Naidu for giving an opportunity to the members to speak in their mother tongue, and for efficient management during the Covid Pandemic.

Congress leader Jairam Ramesh also spoke on the contribution of Mr. Naidu. He said, Mr. Naidu treated all the members equally and gave them equal opportunity in the House. Deputy Chairman Harivansh said, the kind of conviction, Mr. Naidu had for his ideology and to discharge his responsibilities, is a lesson for everyone. He hailed the Chairman for his support and guidance.

Derek O’ Brien of TMC also lauded Mr Naidu, saying that Rajya Sabha’s productivity has increased during his tenure. Mr. Brien also mentioned the story of Mr. Naidu losing his mother at an early age. This made Mr. Naidu emotional. Tiruchi Siva of DMK said, Mr. Naidu gave the opportunity to the members to speak in their mother tongue.

Dr. Manoj Jha of RJD said, the tradition of dialogue must be continued. AAP MP Raghav Chadha said, the Chairman is an inspiration for the younger generation.  Vandana Chavan of NCP said, Mr. Naidu encouraged members to speak in their mother tongue and imbibed discipline among them.