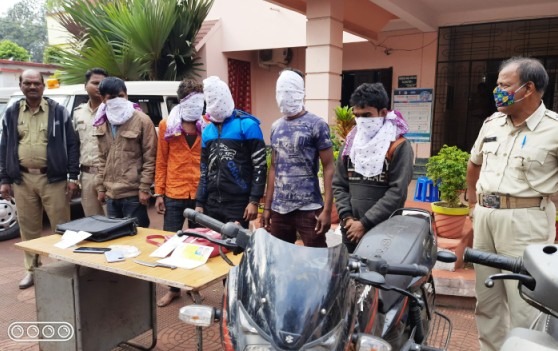 Rajgangpur: Rajgangpur Police have arrested five thieves and recovered the looted items and valuables on Wednesday. The bike used in the crime was also seized.

The arrested youths are Vicky Soni, Raja, Mangalu, Ezaz and Salendra. SDPO Dr Sashank Shekhar Dehury told reporters that mobile phones and other valuables were also recovered from them.

Police said the items recovered were looted in the last three days. The miscreants were forwarded to court.

The officer in charge of Rajgangpur police station said the arrested youths had stolen the vanity bags of the girls of Duduka area who were cycling down from Rajgangpur to their homes.

Restoration Of Physical Mulakat Approved In All Jails Of Odisha