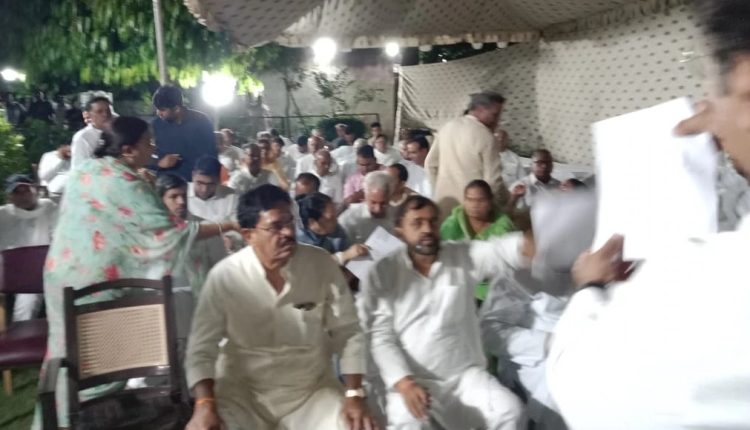 New Delhi: A massive late-night drama unfolded in Rajasthan, as 82 Congress MLAs reached Assembly Speaker CP Joshi’s residence with their resignation letters amid buzz over the change in leadership in the state.

According to reports, these MLAs, loyal to Chief Minister Ashok Gehlot, adopted the stand on Sunday evening, against the possibility of Congress leader and Gehlot’s bete noire Sachin Pilot taking over as the next chief minister.

As per reports, all the resignations were collected at the residence of Cabinet minister Shanti Dhariwal.

Pratap Singh Khachariyawas, who is from the Gehlot faction, said that all the MLAs were angry and were resigning. “We are going to the party president for that. MLAs are upset that how can CM Ashok Gehlot take a decision without consulting them,” news agency ANI quoted him as saying.

He further said that said CM Gehlot should pay heed to the suggestions of the MLAs. “We have 92 MLAs with us,” he said, adding, “10-15 MLAs are being heard while other MLAs are being neglected. Party doesn’t listen to us, decisions are being taken without it.”

“We aren’t going to Delhi at the moment, we have been instructed by Congress interim president Sonia Gandhi to conduct one-to-one talks with Rajasthan Congress MLAs. We’ll meet them tonight,” Congress leader Ajay Maken was quoted as saying by news ageny ANI.

It is to be noted here that as CM Gehlot is all set to contest the Congress presidential election, speculations are rife that the Congress central leadership may back Sachin Pilot for the top post of the desert state.