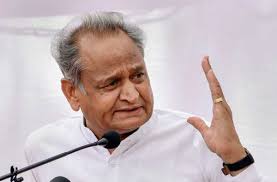 New Delhi: Rajasthan Chief Minister Ashok Gehlot has criticized Centre over farm laws and said that farmers are forced to welcome New Year out on the streets.

He said the entire nation was waiting for a fruitful outcome of talks so that the agitating farmers could return to their homes to celebrate the New Year with their families and near and dear ones.

Gehlot twitted that the government didn’t relent and the only outcome is another round of talks on January 4.

This statement from Gehlot comes after Ministers of Rajasthan Cabinet in a meeting held at Chief Minister’s residence decided that Pradesh Congress Committee will organise sit-in on January 3, 2021, to express solidarity with the protesting farmers.

Rajasthan Congress will also launch a week-long campaign called ‘Kisan Bachao- Desh Bachao’ from January 5 and party workers will go from village to village demanding to repeal of the three agriculture laws.

Scores of farmers have been agitating at different borders of Delhi since November 26 against three newly enacted farm laws by the Centre.