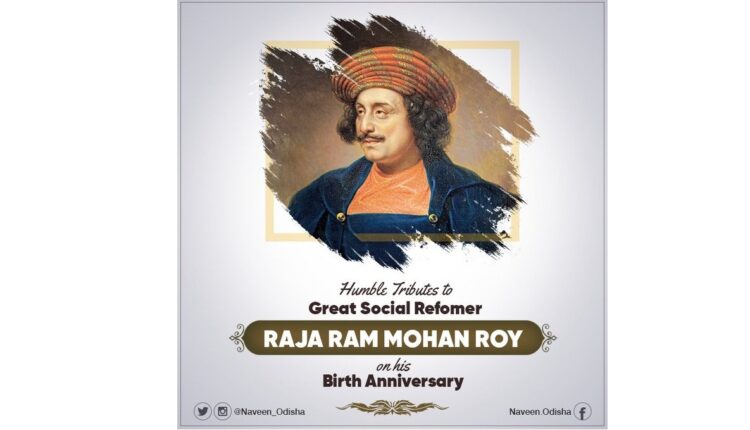 Taking to Twitter, PAtnaik described the leader as a “champion of women’s rights”.

Humble tribute to one of the greatest leaders of the Indian Renaissance #RajaRamMohanRoy on his birth anniversary. His role as a social reformer and champion of women’s rights will keep inspiring generations to come. pic.twitter.com/VscBpEyXkE

Known for his efforts towards abolishing sati and child marriage, the ‘Father of the Indian Renaissance’, Ram Mohan Roy, who was born on May 22, 1772, was bestowed with the title of Raja by Akbar II, the Mughal emperor. The founder of the Brahmo Samaj in 1828, Roy was born into a Vaishnavite family in Radhanagar Hoogly and would go on to revive the ethical principles of the Vedanta school of philosophy as written about in the Upanishads.

His most significant contribution as a social engineer was towards women’s rights. Nearly 200 years ago, when evils like — Sati — plagued the society.

Roy fought to abolish the practice of Sati. He established a number of schools to popularise a modern education system in India.

BTS’ Butter surpasses 105 million views in less than 24 hours; becomes fastest MV in YouTube history to do so