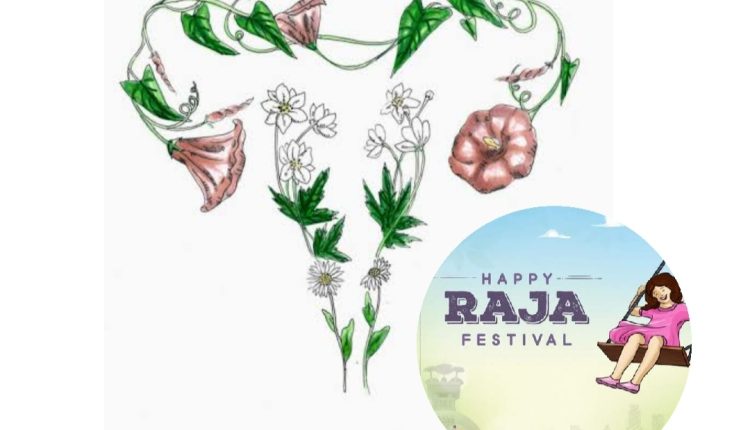 Bhubaneswar: Raja Parba or Mithuna Sankranti is a 3-day festival to honour womanhood which is celebrated across Odisha.

The speciality of this festival is that it not only celebrates the womanhood but it also celebrates the happiness of the earth being fertile. It is celebrated for Bhudevi or earth. It is believed in Odisha that the divine wife of Lord Jagannath (Vishnu) is known as Bhudevi and she undergoes her menstrual cycle during this period before the onset of rains.

The word ‘Raja’ derived from a Sanskrit word Rajaswala means a menstruating woman. The interesting part of this festival is that it celebrates this aspect of womanhood which makes the feminine entity unique. Because menstruation is considered as a sign of fertility, and therefore, it celebrates femininity and her ability to give birth to another life.

At this time the Goddess Earth is given rest and all agricultural activities like digging the soil, ploughing the field, are being suspended. It is believed that after this the earth becomes even more fertile.

Each and every woman is compared with the earth and just as the earth is getting fertile, women are also given a special place in this festival. She would not have to work for 4 days and allowed to take rest during these days.

During these three days, women do not have to go to the kitchen. However as per the rituals on the very first day, the women rise before dawn, wash their hair, anoint their bodies with turmeric paste and oil and then take the purificatory bath in a river or tank. Peculiarly, bathing for the rest two days is prohibited. They don’t walk bare-foot do not scratch the earth, do not grind, do not tear anything apart, do not cut and do not cook. Women have to wear Alta. Jewelry has to be worn along with new clothes. During all the three consecutive days they are seen in the best of dresses and decorations, eating cakes and rich food at the houses of friends and relatives, spending long cheery hours, moving up and down on improvised swings, rending the village sky with their merry impromptu songs.