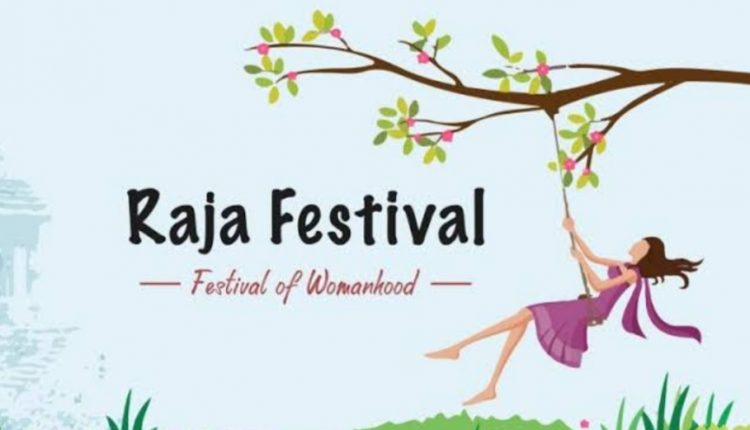 Bhubaneswar: The Raja Parba of Odisha is one of most popular festivals of the state. Dedicated to Bhuma Devi, the consort of Lord Vishnu, Raja Parba celebrates womanhood.

The festivities begin a day before Mithuna Sankranti and conclude two days after that.

The first day of the festival is called Pahili Raja, the second is Mithuna Sankranti and the third Bhu daha or Basi Raja. The preparation begins one day before Pahili Raja, and it is called Sajabaja. Primarily, it is a time for the unmarried girls to prepare for their matrimony. They follow various customs related to the festival by consuming nutritious food like Podapitha, not walking barefoot, taking a bath on the first day, and merrily swinging on ropes attached to a tree.

Each day of the festival has its own name and significance — the first day is called Pahili Rajo, the second day is Mithuna Sankranti, which signifies the beginning of the solar month of Mithuna i.e., the rainy season; the third day is Bhu Daaha or Basi Raja and the fourth day is called Vasumati Snana.

Women are expected to follow the ‘rules of menstruation’ during these three days.

They are expected to wake up at dawn and take a bath on the first day, after which bathing is not permitted till the end of the festival.

They are also encouraged to buy new clothes, play games and are served special delicacies. They are kept away from all household chores.

A special aesthetic attraction of the festival are the makeshift, decorated swings that are installed in trees. There are different types to the swings as well like Ram Doli’, ‘Charki Doli’, ‘Pata Doli’, ‘Dandi Doli’ etc.

The festival, which started as a tribal practice, has now spread to all parts of Odisha, celebrated especially in places like Puri, Balasore and Cuttack.

Congrats Novak Djokovic; A review of the 2021 French Open