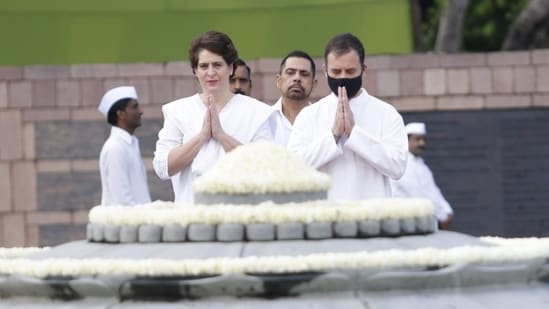 New Delhi: Congress leaders Rahul Gandhi and Priyanka Gandhi Vadra paid homage to their father, former Prime Minister of India, Rajiv Gandhi on his 78th birth anniversary at Vir Bhumi on Saturday. They were accompanied by Robert Vadra, MP KC Venugopal, and Leader of Opposition Mallikarjun Kharge. Rajiv Gandhi served as the sixth prime minister of India between 1984 to 1989 before he was assassinated by the LTTE terrorists in 1991.

Posting a video on Twitter, Rahul Gandhi wrote, “Papa, you are with me every moment, in my heart. I will always try that I can fulfill the dream you dreamt for the country.”

Remembering the former PM’s legacy, the official Twitter account of the Congress Party tweeted, “We fondly remember former Prime Minister of India, Rajiv Gandhi, on his birth anniversary. Hailed as the ‘architect of 21st century India’, it was through his farsighted vision that ushered in the IT & telecom revolution in India.”

To mark this day, the Chief Minister of Rajasthan, Ashok Gehlot will inaugurate Rajiv Gandhi Centre of Advance Technology or R-CAT at Jaipur.

All India Mahila Congress said that it will observe the day as Women Political Empowerment Day. “Owing to his immense contribution in providing grassroots leadership to women through 73rd & 74th Amendment, Mahila Congress shall observe #WomenPoliticalEmpowermentDay today,” the women’s wing of the party tweeted.

Goa Congress tweeted that it will hold a Sadbhavna Diwas today at 9:30 a.m. to celebrate the day.

Odisha Congress Sevadal tweeted a picture of the Private Pilots Licence of Rajiv Gandhi. Rajiv Gandhi had a commercial pilots licence and was also a pilot with Indian Airlines, the domestic national carrier.