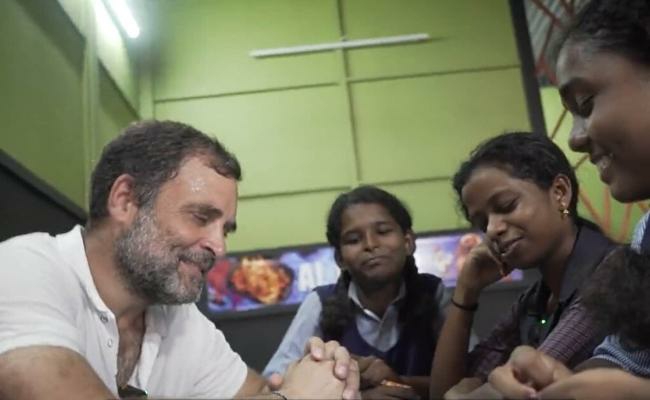 Kerala: Politician Rahul Gandhi won hearts on Twitter on Wednesday after he met the students in Kerala who identified themselves as the BTS ARMY. The Indian National Congress member is currently on a five-month-long Bharat Jodo Yatra. As part of the same journey, he reached Kerala and met a group of young girls.

Rahul shared a video on his official Twitter handle that featured him interacting with the students. He talks to them about their interests, studies and their friendship. When he asks them about their plans, the girls say they want to become a nurse but want to practice in Korea. A curious Rahul digs further and they tell him that it’s because they are ‘BTS Army.’ Rahul is surprised and asks them why they like Korean music so much. The fans tell him, “When you’re feeling down, listening to their music is quite comforting.” He also watches BTS’ music videos with the fans during his interaction.

Now, this interaction between an Indian politician and the BTS ARMY from Kerala is going viral on social media. Many fans are celebrating their own fellow group members, praising them for being honest about their love for the band.

A delightful chat with these incredible girls who are Kerala’s BTS Army! pic.twitter.com/MVtHsCKkrT