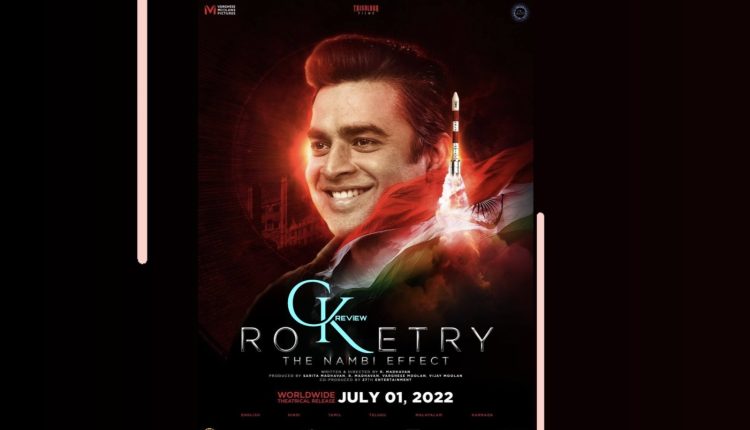 Hyderabad: Actor R Madhavan, with the release of ‘Rocketry: The Nambi Effect’, has stepped inside the shoes of a filmmaker. Even though he said that he did not have plans to direct ‘Rocketry’, there possibly could not have been anyone better than him to tell the story of Nambi Narayanan and to showcase the hard work that scientists and aerospace engineers like him. The film finally hit the theatres on Friday, July 1, and has been released in multiple languages including Hindi and Tamil, among others.

‘Rocketry: The Nambi Effect’ is a biopic based on the life of former ISRO scientist Nambi Narayanan, who was falsely accused of espionage. It is also the story of all those passionate people who make their skills their spirits, push their families aside and put everything into work. And the story of those people who are stabbed in the back when the people around them see them rising. Rocketry is about how false espionage accusations against a man obsessed with his work and wants his country to rise higher while pushing him behind the bars and the country by many years in space research.

This movie tells you that if Nambi Narayanan had not been imprisoned and his work on space science had not been stalled, then today ISRO would have reached different heights altogether. The story of Nambi Narayanan is such that it is astonishing to think that why no major film production company has made a film about it till now.

On the cinematic aspect, ‘Rocketry: The Nambi Effect’ marks the debut of R Madhavan as a filmmaker. His debut project has got him appreciation at international levels. Not only has he excelled as a filmmaker, but Madhavan has surpassed the expectations by delivering possibly his life’s best performance to date. The film also stars actors Shah Rukh Khan and Suriya in cameo roles.