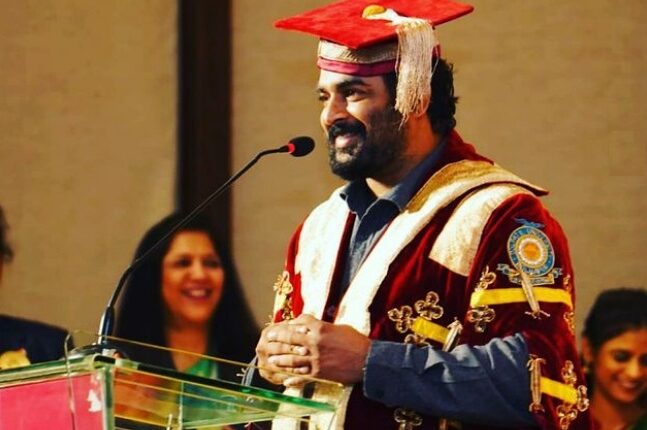 Mumbai: Actor R Madhavan was conferred with honorary doctorate degree for his contribution to arts in cinema. The actor took to Instagram and shared pictures from the felicitation ceremony.

The star was conferred the degree of Doctor of Letters (D. Litt.) by DY Patil Education Society.. The 50-year-old received the honour at the education society’s 9th convocation ceremony.

R Madhavan, one of Bollywood and South’s most reputed actor has done several popular films in his career. Madhavan started his acting journey in Hindi daily soaps and later quickly gained recognition with his amazing on-screen presence in the South film industry.

Madhavan gained recognition in Tamil cinema by playing a pivotal role in Alaipayuthey. Climbing his way to the top, he quickly became a household name with his internationally renowned films like Rakeysh Omprakash Mehra’s Rang De Basanti and Rajkumar Hirani’s 3 Idiots.

R Madhavan was last seen in a Hindi film in a prominent role in 2015’s Tanu Weds Manu Returns, though his Telugu film 2016 film Irudhi Suttru was also dubbed in Hindi and released as Saala Khadoos.

However, he has been active in Tamil and Telugu film industries featuring in successful films such as Vikram Vedha (Tamil, 2017), Savyasachi (Telugu, 2018) and Nishabdham (Telugu, 2020). He has been in news for the filming of the ambitious Rocketry: The Nambi Effect, in which he will be seen playing Padma Bhushan awardee S Nambi Narayanan, Indian scientist and ISRO official who was falsely accused of espionage and arrested.