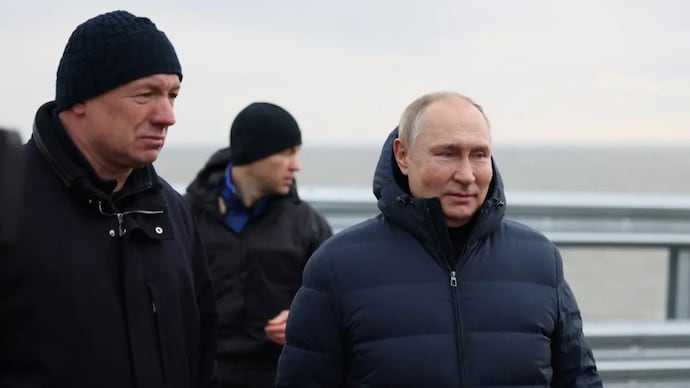 Moscow: Russian President Vladimir Putin was seen driving a Mercedes across the Crimean Bridge linking Russia to the annexed Crimean peninsula, months after an explosion tore through the key bridge.

The 19 km road and rail bridge, which was personally opened by Vladimir Putin in 2018, was bombed on October 8 in an attack Russia said was carried out by Ukraine. But Ukraine never claimed responsibility for the bombing.

Putin, accompanied by Deputy Prime Minister Marat Khusnullin, was shown on state television behind the wheel of a Mercedes, asking questions about where the attack took place.

“The left side of the bridge, as I understand it, is in working condition, but nevertheless it needs to be completed. It still suffered a little, we need to bring it to an ideal state,” Vladimir Putin said in an exchange that was broadcast by Russian television.

Vladimir Putin also walked along parts of the bridge, Europe’s largest, to inspect sections that are still visibly scorched.

The explosion wrecked one section of the road bridge, temporarily halting traffic across the Kerch Strait. The blast also destroyed several fuel tankers on a train heading towards the annexed Crimean peninsula from neighbouring southern Russia. Putin retaliated with air strikes on civilian areas and Ukraine’s power grid, taking the war into a new phase.