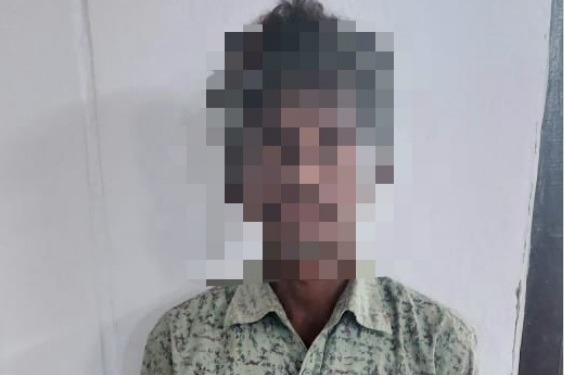 Purusottampur: A murder accused, who was absconding for 18 years, has been arrested by Purushottampur Police in Ganjam district on Sunday.

Addressing the media persons, Purushottampur PS IIC Jagannath Mallick said that on 21st April 2002, Shankar Nahak, a resident of Sargunapalli village under Bhatakumarda Panchayat, was allegedly killed by some people in the village over a land dispute.

During the investigation, it was found the Yudhisthira Nahak, Kandha Nahak, Bhaskar Nahak and Chhaila Nahak of the same village were involved in the murder.

While, Yudhisthira, Bhaskar and Kandha were immediately arrested and produced before the court, Chhaila Nahak managed to flee to Hyderabad.

After remaining elusive for 18 long years, the accused, Chhaila Nahak, of Sargunapalli village, was nabbed on the basis of a non-bailable warrant (NBW) issued by the Purushottampur Judicial Magistrate.

Constables Manas Ranjan Das and Hemant Sahu arrested the warrantee and brought him to the police station. Later in the day, he was produced in a local court here, said Purushottampur PS IIC Jagannath Mallick.

Purusottampur Police with much effort arrested one warrantee Chhaila Nahak @Das, S/O.Chanchana Nahak of Vill-Sargunapalli, PS: Purushottampur who had been absconding since 18 years in a murder case of Purushottampur PS Case No-51/2002 Dtd. 21.04.2002, U/S.114/323/302/34 IPC, pic.twitter.com/fE6kEvlQo6

Over 15 houses burgled in Narasinghpur in four days