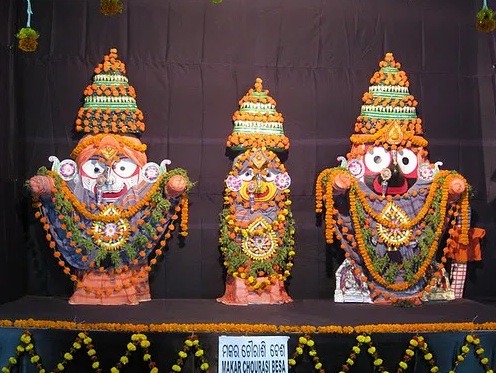 According to temple legend, the dish has a special significance on this day. According to the Skanda Purana, sage Kashyap observed the day to please Lord Jagannath. Goddess Lakshmi returned on this day with Makara Chaula from her parental home—which was then offered to the Lord Jagannath. Keeping true to its ritual significance, people take a holy dip in the sea, offer prayers to the Sun God, with red flowers on a copper plate, before partaking the bhoga.

The bhoga, once prepared, is carried around the temple by the sevaks, a practice known as “Makara Bedha.” As tradition goes, the three deities are painted with lime and covered with cloth, before being served the Makara Chaula on three silver plates. Prepared from harvested rice, the dish comprises of banana, jaggery, sesame, milk, ghee, coconut, freshly-made butter, fruits and dry fruits.

Not just the temple, almost every household in Odisha offers the bhoga to the deities. Surya mantra is chanted to invoke the blessings of the Lord, before the bhoga is shared with family members.

Bhubaneswar: Toshali Crafts Mela To Be Held From Jan 21