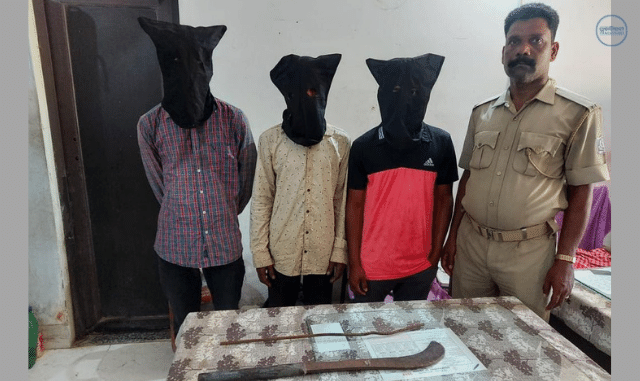 Puri: Puri Police nabbed three miscreants armed with sharp weapons while they were planning to commit dacoity in the Sadar police station area on Friday.

Informing about the same, Puri Sadar PS IIC Sushant Kumar Behera said that on receiving a tip-off about the assembly of suspected dacoits near the water storage project in the Sadar PS area, a police team rushed to the spot and nabbed three miscreants, who are hatching a plot to commit robbery.

The arrested persons have been identified as Mituna Bhoi (25), Sridhar Jena (34) and Pritam Mishra (24). A bike, an iron rod, a machete, and raw materials used for making crude bombs were seized from them.

A case 158/22 has been registered in this regard and the accused have been forwarded to the court today, the police added.

Worth mentioning that with the rise in loot incidents in and around Puri town, Superintendent of Police Dr Kanwar Vishal Singh has instructed IICs of all police stations to stay vigilant and curb such criminal activities.