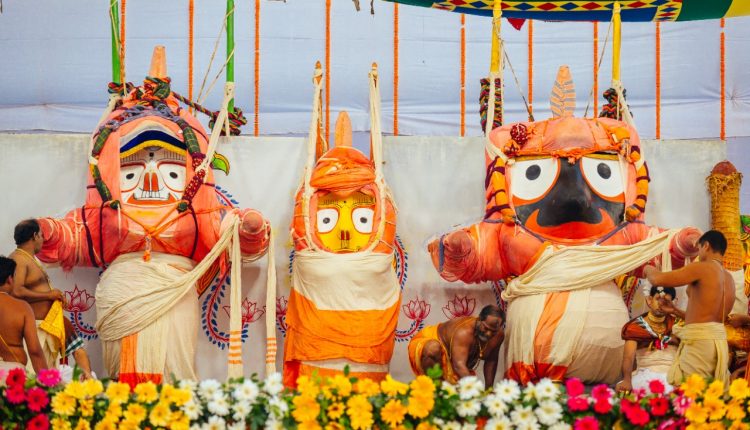 Puri: The Snana Purnima rituals of Holy Trinity (Lord Jagannath, Lord Balbhadra, and Goddess Subhadra) along with Lord Sudarshan were held yesterday where the deities were bathed to beat the heat of the summers.

As a person is attended by doctors and family members when he suffers from ailments, the lords also undergo treatment by their servitors inside Anasara house of Jagannath temple after falling sick (fever) due to holy bath on Snana Purnima.

At night, the three deities – Lord Jagannath, Devi Subhadra and Lord Balabhadra are carried back to ‘Anasara Ghara’ to keep them away from public darshan for about 14-days.

During this Anasara or Anabasara period, the devotees are forbidden from seeing the idols of the Lords. According to mythology, the three deities are believed to have developed a fever after the prolonged bathing on Devasnana Purnima day.

The deities, Lord Balabhadra, Devi Subhadra and Lord Jagannath, are kept in the ‘Anasara Pindi’ where they are ‘treated’ with natural herbal medicines, and specially prepared oils. The ailing deities are only offered only fruits and water, mixed with cheese and ‘Dasamula’ (herbal) medicines while Daitapati Sevayats (the priests who carry out holy rituals) now perform secret rituals to cure them.

The three deities under ‘treatment’ in the Anasara Pindi will be offered ‘Pana Bhoga’ by Pati Mahapatra to help them heal. The natural medicines and other herbs are also offered to the deities by the Daitapatis. A special oil ‘Phuluri Tela’ prepared for the deities, will be applied on the wooden idols on the eighth day or ‘Ashtami’ to protect them.

It is part of the faith that on the Dashami, the deities regain their balance and strength. The next day, the deities are painted in a new colour to protect the wooden idol from damage.

The Anasara ritual is, in a way an annual maintenance ritual for the wooden idols, because the wooden idols of the three deities are changed only once in twelve years, in another mega festival known as ‘Naba Kalebara’. The all-organic, all-natural oils and preservatives are a part of the twelfth-century shrine’s ancient traditions.