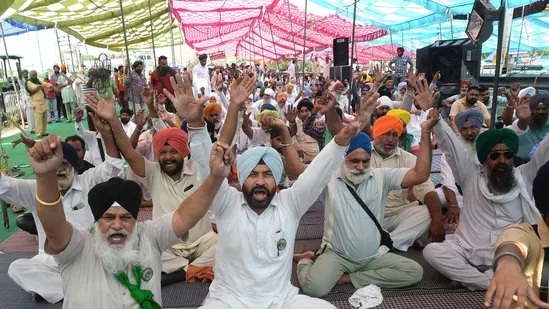 Ferozepur: The farmers’ agitation in Punjab over sugarcane prices entered its fifth day on Tuesday. On Tuesday, the officials in the Ferozepur division said that they had to cancel and divert a number of trains due to the ongoing agitation.

Scores of farmers had on Friday launched an agitation for an indefinite period to press the Punjab government to accept their demands related to pending dues of sugarcane and hike in cane prices.

The last meeting on Monday to a final call on the new state assured price (SAP) for the sugarcane crop remained inconclusive.

At least 27 Express trains were cancelled on Tuesday, while 11 were short terminated or diverted. Amritsar-Delhi Shatabdi Express is among those trains which have been cancelled, the railway officials said.

On Monday, 63 trains were affected due to the protest. Twenty seven of these were cancelled, while 11 were diverted and 25 were short-terminated.

Meanwhile, a group of officials and experts, including Punjab’s Commissioner (Agriculture) Balwinder Singh Sidhu and two economists of Punjab Agricultural University, on Monday held a meeting with farmer leaders at Jalandhar and heard them over the cost of sugarcane production.

The farmers are demanding a hike in SAP of sugarcane. They have already rejected a hike of Rs 15 per quintal announced by the Punjab government a few days back.

The state government had revised sugarcane rates to Rs 325 for the early variety, Rs 315 for mid variety and Rs 310 per quintal for the late maturing variety. The farmers, however, have pointed out that neighbouring Haryana was giving ₹358 per quintal to its cane growers.

The protesters also want the state government to clear payment of arrears to the tune of Rs 200-250 crore.

The protest though has affected road and train traffic, emergency vehicles have been allowed to ply.