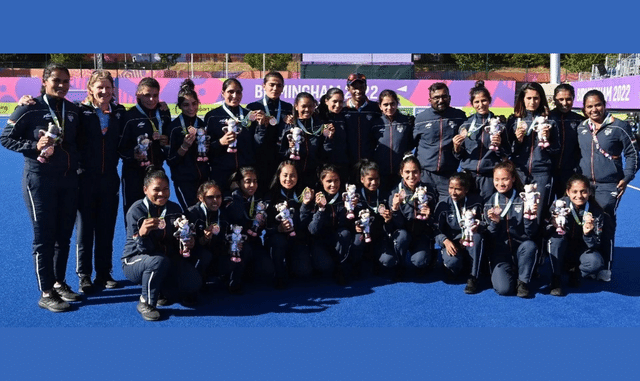 New Delhi: After a two-month long European sojourn, the Indian Women’s Hockey Team returned home with a historic Commonwealth Games Bronze medal. This incredible feat was the pinnacle of what was a roller coaster ride for the Savita-led Indian team who showed resilience to bounce back from a heartbreaking ninth place finish at the FIH Women’s World Cup which took place in the Netherlands and Spain in July.

The Indian team also took part in their last set of FIH Hockey Pro League matches in June in Belgium and Netherlands, where they finished third.

Reflecting on the long tour, Indian Women’s Hockey Team Captain Savita said, “It was a pretty long tour, there were ups and downs but it taught us a lot of things. We started the tour on a strong note by finishing third in our debut FIH Hockey Pro League 2021/22 campaign and then went through a rough patch during the World Cup. Finishing ninth was disappointing, but it was equally important to move ahead and take positive learnings from the campaign to focus on the Birmingham 2022 Commonwealth Games.”

“We then had a short preparatory camp in Nottingham, where we introspected our performance and worked on our mistakes. We came in with a fresh mind and took one day at a time in Birmingham. I think the team unity also helped us bounce back. The bond we share helped us in maintaining a positive atmosphere in the team, it helped us focus on the present moment and overcome the challenges thrown at us,” added the ace goalkeeper, who led team India from the front.

Savita & Co. started their Commonwealth Games campaign with back-to-back wins against Ghana (5-0) and Wales (3-1) respectively but lost 1-3 to England in their third match. They registered a 3-2 win against Canada in their fourth match to finish second in Pool A. The Indian team put up a solid show against Australia in the Semi-Final, but couldn’t manage to get past them as they suffered a narrow 1-1 (0-3 SO) loss. However, they responded to the setback in style and registered a thrilling 1-1 (2-1 SO) win against New Zealand to clinch the historic Bronze medal on Sunday.

Savita made three sensational saves in the shootout against New Zealand to help India end their 16-year wait for a medal at the prestigious Commonwealth Games.

Speaking about the achievement, the ace goalkeeper stated, “We are happy and proud of what we’ve achieved, and most importantly how we’ve achieved it. The defeat against Australia in the Semi-Final was hard to accept, we lost our morale. But it was our Coach Janneke Schopman who motivated us and made us realise that we still have an opportunity to return home with a medal. So, all credit for the medal goes to her. I am proud of how we as a team showed great character and never gave up till the last minute.”

“It’s not just a medal for us, it’s an inspiration. The younger generation will also get inspired by this. We’re grateful for all the support and love our fans have given to us throughout our campaign in the World Cup as well as the Commonwealth Games,” she added.

Savita stated that the team’s goal remains the same, which is to win the Gold Medal at the Asian Games to ensure direct qualification for the Paris Olympics 2024.

“We will spend some time at home with our families and come back to the camp with fresh minds. Our goal remains the same, which is to win the Gold medal at the Asian Games for the direct qualification for the Paris Olympics 2024. We take the one-year postponement as an opportunity to train for the Asian Games. We have significant time to prepare and approach step-by-step,” she concluded.