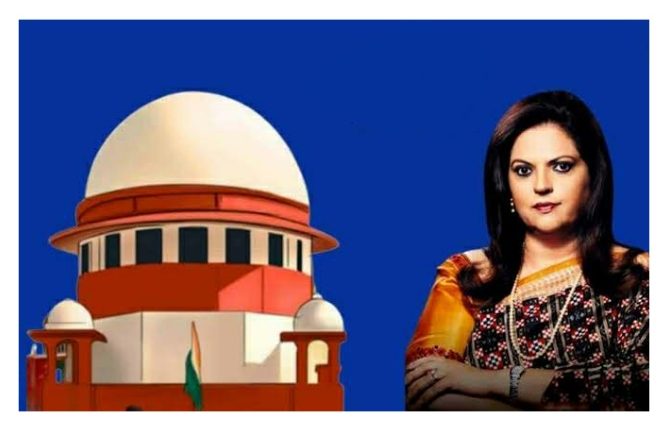 New Delhi: The Supreme Court, on Friday, directed that the FIRs registered Times Now anchor, Navika Kumar, over the remarks made by Nupur Sharma about Prophet Muhammed on a channel debate, be transferred to the IFSO unit of the Delhi Poolice.

The FIR registered by the Delhi Police IFSO Unit shall be taken as the lead case. The direction will be applicable to future FIRs which may be registered with respect to the same telecast. Investigation of any subsequent complaint on the same News hour debate shall be transferred to IFSO Unit.

The Supreme Court on Friday clubbed and transferred to Delhi Police all FIRs registered against journalist Navika Kumar over the controversial remarks made by ex-BJP spokesperson Nupur Sharma on Prophet Mohammad during a TV debate moderated by her.

A bench of Justices MR Shah and Krishna Murari said no coercive action would be taken against Kumar for a period of eight weeks so that she could avail remedies in the interim period.

It also granted liberty to Kumar to move the Delhi High Court for quashing of the lead FIR.

The Intelligence Fusion and Strategic Operations (IFSO) unit of Delhi Police will probe the matter.

The apex court on August 8 had granted interim protection from arrest to Kumar and issued notices to the Centre, West Bengal government and others on Kumar’s plea seeking quashing of proceedings initiated against her.

Sharma’s remark on the Prophet during a TV debate had triggered protests across the country and drew sharp reactions from many Gulf countries.

Body Of Newborn Found In Bag On Bhadrak DHH Premises

Two Cyclonic Circulations Over Bay Of Bengal In Next 13 Days!