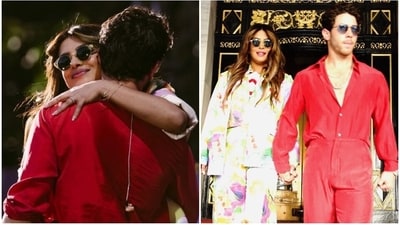 New York: The Global Citizen Live Festival saw many big names in attendance, including Priyanka Chopra, who hosted the show at New York City’s Central Park. Global Citizen is celebrating 10 years of impact with performances from artists like Usher, Metallica, SZA, Charlie Puth, Mariah Carey, Tems, and more, and appearances from influential leaders from across the globe. Jonas Brothers also performed at the event, and Nick even posted pictures with his wife on Instagram, announcing they were ready for the show. The couple’s chemistry and quirky style statements won the crowd and hearts on the internet.

Priyanka was decked up in a white pantsuit with a splash of colours as she turned host at the event. As Joe Jonas introduced Priyanka as an ambassador of the Global Citizen Festival, Nick added, “And I have the honour of calling her my wife. So please welcome Priyanka Chopra Jonas.” Priyanka joined them on stage and greeted Nick with a quick kiss before giving him and her brothers-in-law a hug. “I’ll see you guys for dinner okay,” she added.

She later shared a video of the moment on her Instagram Stories and wrote for Nick, “Thank you for the intro babe @nickjonas.” The Jonas Brothers performed several of their hit songs at the event. Priyanka later joined Nick and was seen grooving and singing as Mariah Carey performed on stage. Priyanka also met the speaker of the United States House of Representatives, Nancy Pelosi, at the event and was seen posing with her for pictures.