Mumbai: Global star Priyanka Chopra Jonas has congratulated the actor-comedian for his nomination at the International Emmy Awards.

Priyanka took to her Instagram Stories to congratulate Vir. She shared a picture of the nominee medal won by Vir and wrote, “Congratulations @virdas u make us so proud!” 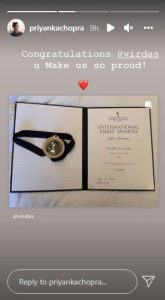 It is pertinent to mention that the comedian has been in the news for the ”I Come From Two Indias” monologue that he recently performed as part of his US tour which a section of people described as an insult to the country.

Besides Das, actor Nawazuddin Siddiqui was nominated for the best performance by an actor category for his Netflix movie ”Serious Men”. He lost out to Scottish actor David Tennant for ”Des”.

Cabinet Approves Extension Of PMGKAY For Another Four Months

Mehndi Hai Rachne Waali to end on a happy note!