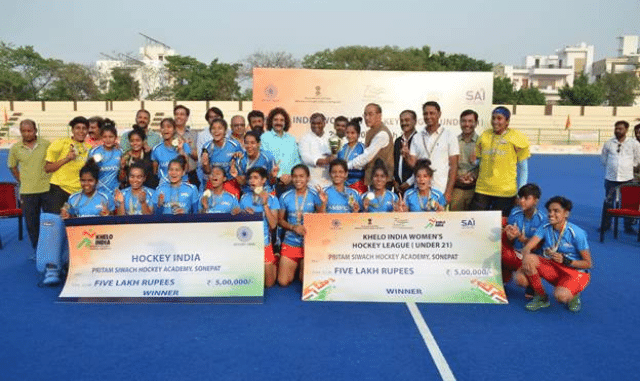 New Delhi: Pritam Siwach Hockey Academy, Sonepat, emerged winners of the Khelo India Women’s Hockey League (U-21) after defeating Sports Hostel Bhubaneswar 5-0 in the final at the Sports Authority of India National Centre of Excellence in Lucknow on Wednesday.

Manju Chorsiya scored a brace while Tannu, Ritika and captain Bharti Saroha scored one goal each. Madhya Pradesh Hockey Academy, SAI ‘B’ team and the SAI ‘A’ team stood 3rd, 4th and 5th respectively. Sanjna Horo of SAI ‘A’ team remained the topscorer of the final phase with 11 goals.

The Sonepat-based academy is run by Dronacharya Award winner and former captain of the India women’s hockey team Pritam Rani Siwach. Her husband Kuldeep Siwach is the coach of the U-21 women’s team, which took home not only the trophy but also a cash prize of Rs 10 Lakh.

“We had planned for the victory over the three phases of the tournament. In the final today, we used the correct formation that we wanted and got the target we wanted to achieve,” said Kuldeep to Sports Authority of India. “I want to thank SAI and Hockey India from the bottom of my heart for this exposure.”

Talking about the team composition, Kuldeep added, “We have a class 7 student in our team, girls who have played in sub-junior level as well as the junior national level. These girls showcased a lot of confidence and everyone who watched them play saw it. Our captain Bharti Saroha also gave her best and in the coming future, I see them making it big for the Indian national team.”