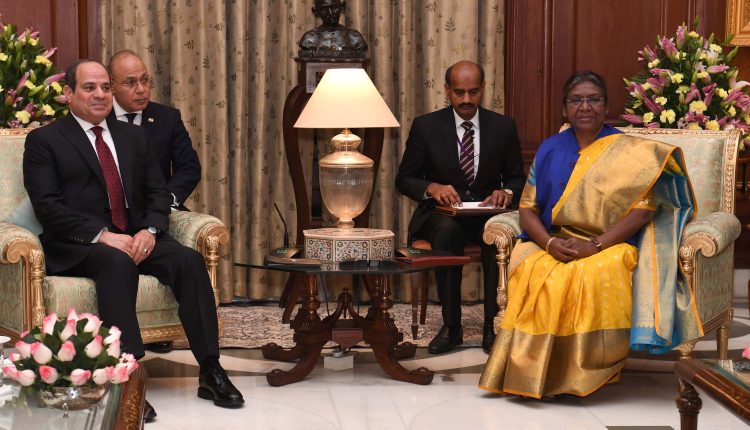 The President of India, Smt Droupadi Murmu received His Excellency Mr Abdel Fattah El-Sisi, the President of the Arab Republic of Egypt at Rashtrapati Bhavan today (January 25, 2023). She also hosted a banquet in his honour.

Welcoming President El-Sisi at Rashtrapati Bhavan, the President said that his visit has come at a very opportune moment, as India and Egypt are celebrating 75 years of establishment of diplomatic relations. She noted that Egypt was one of the first countries with which we established full-fledged diplomatic relations, just three days after India’s independence.

The President said that India and Egypt are ancient civilizations with thousands of years of merchandise and cultural linkages. Ties between our two countries have been further strengthened through our struggle for freedom. Mahatma Gandhi and Saad Zaghloul Pasha shared common goals on the independence of their countries. After Independence, our leaders have also helped in building a bond of affection and admiration between the people of our two countries.

The President said that the West Asia region is a part of the extended neighbourhood of India. We appreciate Egypt’s leading role in promoting peace, prosperity and stability in the region. She said that there is tremendous talent among our young people, and vast potential to bring prosperity and development.  She expressed confidence that this visit would further deepen the engagement and cooperation between India and Egypt.

Subsequently, in her banquet speech, President Murmu said that India and Egypt share many commonalities. We both have a large young population, with a significant share of our workforce depending on agriculture and allied sectors. She said that India is expected to emerge as the third biggest economy in the world by 2030. She invited Egyptian industry to benefit from the Government of India’s flagship initiatives, such as Make in India, Digital India and Start-up India.