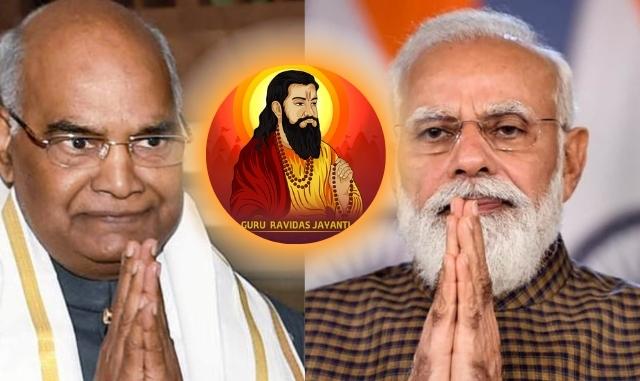 President, PM Remember Guru Ravidas On The Eve Of His Jayanti

New Delhi: The President of India Ram Nath Kovind and Prime Minister Narendra Modi have greeted fellow citizens on the eve of the birthday of Guru Ravidas.

In a message, the President has said, “I extend warm greetings and best wishes to all the fellow citizens on the auspicious occasion of birth anniversary of Guru Ravidasji.

Guru Ravidas was a great saint, poet and social reformer. Through his devotional songs, he tried to eradicate the social evils and bring about harmony in society. He is considered a leading poet-saint of the Bhakti Movement.

He tried to inculcate the feeling of mutual love and equality among the people. His teachings of peace and fraternity are even more relevant today. Being an enlightened spiritual person and a great social reformer, Guru Ravidas always encouraged his followers to follow the path of hard work, diligence and forbearance.

Let us take pledge to follow the path shown by Guru Ravidasji and contribute in building a society based on equality and harmony”.

PM Modi also said that he feels proud that every step taken by his government has imbibed the spirit of Pujya Shri Guru Ravidas ji.

OIC Pertaining To Continued Attacks On Muslims In India: MEA