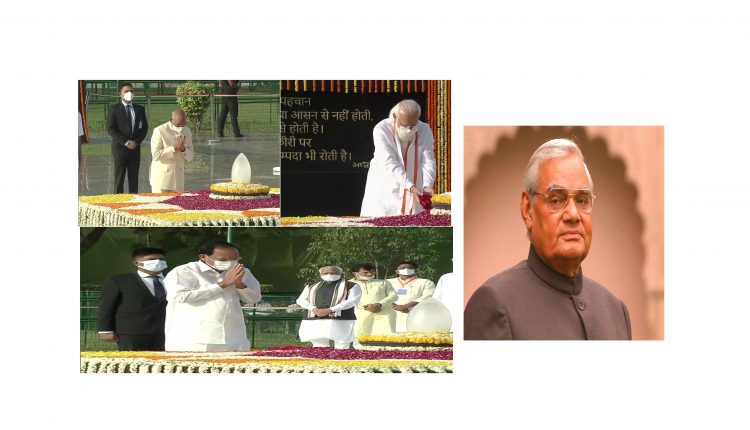 They were joined by several Union Ministers including Amit Shah and BJP national president Amit Shah at ‘Sadaiv Atal’, the memorial to Vajpayee in Delhi, in paying respects to the late Prime Minister.

Today is the third death anniversary of former Prime Minister Atal Bihari Vajpayee. The Bharatiya Janata Party leader served as the Prime Minister of India thrice — 1996, 1998-99 and from 1999-2004.

From being an orator to being a poet, Vajpayee stretched out his horizons as wide as he could. Known as ‘the man of the masses’, Vajpayee was a man of “multi-faceted personality”.

Born on December 25, 1924, Vajpayee hailed from MP’s Gwalior city. He is the recipient of Padma Vibhushan as well as of India’s highest civilian honour, the Bharat Ratna.

After Jawahar Lal Nehru, Vajpayee was the second Prime Minister to have become Prime Minister of India with two successive mandates. He first took charge in 1996 for a brief period of 13 days, and later in 1998 for no longer than 13 months. However, he finally served office for the full term from 1999 to 2004. He was a senior BJP leader as well as one of the co-founders of the party.

Vajpayee served the Lok Sabha, the lower house of parliament, for 10 terms that began in 1957 and concluded in 2009. He was the first head of government from outside the Congress party to serve a full five-year term.

An orator par excellence, Vajpayee had earned much fame as India’s external affairs minister in Prime Minister Morarji Desai’s government during which he delivered a widely acclaimed speech to the United Nations General Assembly in Hindi.