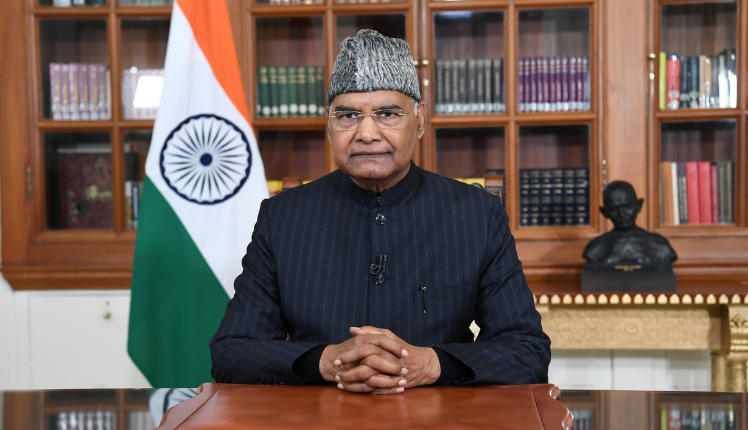 President Ram Nath Kovind has said that India is better placed today to meet the challenges of the future. He said, the twenty-first century is turning out to be the age of climate change, and India has taken a leadership position on the world stage in showing the way, especially with its bold and ambitious push for renewable energy.

In his address to the nation on the eve of 73rd Republic Day, President Ram Nath Kovind exhorted that at the individual level, each one of us can remember Gandhiji’s advice and help improve the world around us. The President exuded confidence that inspired by this spirit of universal brotherhood, India and the entire global community will move towards a more equitable and prosperous future.

Spelling out the challenges posed by the Covid-19 pandemic, the President added that the country has shown an unmatched resolve against the coronavirus.  He mentioned that the vaccination drive is progressing at a quick pace in the country and during the pandemic, India has reached out to several other countries with vaccines and other medical help and India’s contribution has also been appreciated by international organizations.

Mr Kovind said, unfortunately, the virus makes a comeback with new mutations. The President cautioned that as the pandemic is still widespread, people must remain alert and not let their guard down.  He emphasized that in the fight against COVID pandemic, it has now become a sacred national duty of every citizen to follow the precautions suggested by our scientists and experts and we have to discharge this duty till the crisis is behind us.

Appreciating the role of leadership, policy-makers, administrators, and others at the central and state levels for making timely interventions, the President said that the economy is on the move again. He said, it is a testimony to India’s spirit in the face of adversity that the economy is projected to grow at an impressive rate in this fiscal, after going through contraction last year. He said, this shows the success of the Atmanirbhar Bharat Abhiyan launched in the previous year.

President Ram Nath Kovind further added that Small and medium enterprises have played an important role in providing employment to people and imparting impetus to the economy. He said, our innovative young entrepreneurs have set new benchmarks of success by making effective use of the start-up eco-system.

Mentioning the National Education Policy in his address, President Ram Nath Kovind said, to reap the demographic dividend, the government has created the right environment with the National Education Policy that makes a perfect blend of traditional values and modern skills. He said, it is gratifying to note that India has found a place among the top 50 innovative economies.

The President said that in the past year, the country’s sportspersons also brought cheers as they made their mark at the Olympics and the self-confidence of these young champions inspires millions today.

The President said that in recent months, he has witnessed remarkable examples of people strengthening the country and the society through their commitment and action in diverse areas. He said, the dedicated teams of the Indian Navy and Cochin Shipyard Limited have built an indigenous state-of-the-art aircraft carrier IAC Vikrant which is to be inducted into our Navy. He added that due to such modern military capabilities, India is now counted among the world’s leading naval powers. This is an impressive example of moving towards self-reliance in the field of defence.

Citing another example which he termed very touching,  the President said that in a village called Sui in Bhiwani district of Haryana, some enlightened citizens have transformed the village under the Swa-Prerit Adarsh Gram Yojana, demonstrating sensitivity and diligence. He said, this example strengthens his belief that a new India is emerging – a Strong India and a Sensitive India; Sashakt Bharat, Samvedan-sheel Bharat. He stressed that if all the successful people of India work sincerely for the development of their birth-places, then the whole country will benefit from the outcome of such local development.

The President said that today, it is our soldiers and security personnel who carry on the legacy of national pride. He said, when a brave soldier dies on duty, the entire country feels sad, and last month, in an unfortunate accident, the country has lost one of the bravest commanders of the country – General Bipin Rawat – his wife and many brave soldiers. He said, the entire country was deeply saddened by the tragic loss.

The President opined that patriotism strengthens the sense of duty among citizens. He said whether you are a doctor or a lawyer, a shopkeeper or office- worker, a sanitation employee or a labourer, doing one’s duty well and efficiently is the first and foremost contribution you make to the nation. Mr Kovind added that as the supreme commander of the Armed Forces, he is glad to note that it has been a water-shed year for women empowerment in the Armed Forces.

The President highlighted that  India will cross a milestone when it completes 75 years of Independence and the country is celebrating this occasion as ‘Azadi ka Amrit Mahotsav’. He said, it is a great opportunity for not only the next generation but all of us to re-connect with our past and our freedom struggle was an inspiring chapter in our splendid saga. Mr Kovind said that in this 75th year of Independence, let us re-discover the values that animated our glorious national movement.

Mr Kovind said ,  two days ago, on 23rd January, all of us observed the one hundred twenty-fifth birth anniversary of Netaji Subhas Chandra Bose, who had adopted the energizing salutation of ‘Jai-Hind’. He said, Netaji’s quest for independence and his ambition to make India proud inspire all of us.

Throwing light on Indian Constitution, the President in his address mentioned that while the text of the Constitution, dealing with the details of the workings of the State, is quite long, the Preamble sums up its guiding principles – Democracy, Justice, Liberty, Equality, and Fraternity. He said, they form the bedrock on which our Republic stands and these are the values that form our collective inheritance.

The President said, when the country won independence, the exploitation of colonial rule had left the people in utter poverty, but in seventy-five years, we have made impressive progress and new opportunities await the next generation. Mr Kovind expressed confidence that with this energy, confidence, and entrepreneurship, our country will continue to march ahead on the path of progress and will definitely secure its rightful place, befitting its potential, in the global community.

Extending his heartiest greetings to the citizens in India and abroad, on the eve of the 73rd Republic Day, President Ram Nath Kovind said that the diversity and vibrancy of our democracy is appreciated world-wide. He said, it is this spirit of unity and of being one nation that is celebrated every year as Republic Day and this year’s celebrations may be muted due to the pandemic, but the spirit is as strong as ever.

Republic Day: Know Why is it Celebrated?