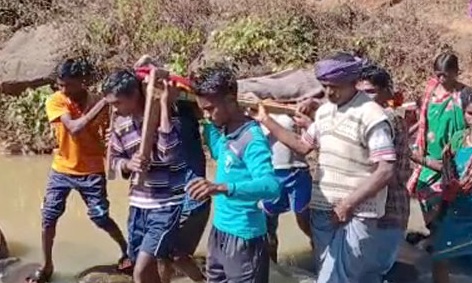 Pregnant Woman Carried On Cot For 2 Kms In Koraput

Koraput: A pregnant woman was carried for around 2 kilometres on a cot due to absence of motorable road to Debasandhagura village under Nandapur block in Koraput district.

According to available information, the woman complained of labour pain following which her family members immediately called up 102 ambulance services. However, the emergency vehicle service failed to reach the spot owing to poor road connectivity.

With no other options left, the woman’s family members along with some villagers carried her on a cot and waded through a stream and hilly terrains to reach the ambulance, stationed two kilometres away from Debasandhagura village.

She was immediately rushed to Nandapur Community Health Centre (CHC) in the ambulance. Her health condition is reportedly stable, sources said.